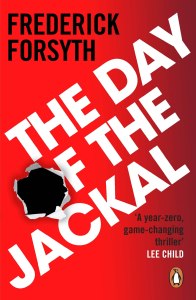 Spy thriller The Day of the Jackal is getting a TV series adaptation at Peacock in partnership with Sky. The drama series is inspired by author Frederick Forsyth’s espionage thriller and the 1973 film adaptation of the same name. Irish screenwriter Ronan Bennett is set to write and serve as showrunner, while Brian Kirk will be the lead director.

The Day of the Jackal follows a professional assassin, who is assigned to President Charles DeGaulle, a man who is put in high security after several assassination attempts. The new series is being described as a “bold and contemporary reimagining of the beloved and respected novel and film.” It will remain true to the source material but will delve deeper into the “anti-hero” of the story in a high-octane “cat and mouse thriller” that’s set against a backdrop of a turbulent geopolitical landscape. Speaking of the project executive producer for Carnival Films Gareth Neame, shared his excitement about collaborating with the talents involved in the project further revealing that the new feature will “retain the pan-European setting and play to the strengths of episodic television in this fast-paced, intelligent international thriller with the story of an assassin and the race to stop him still at the heart of the action.”

While there are no casting details revealed yet the series will go into production next summer. Elaborating on the project Lisa Katz, president of scripted content at NBCUniversal Television and Streaming, described the adaptation of the internationally recognized classic as an “updated, timely, political thriller.” Further adding, “Shepherded by novelist and showrunner Ronan Bennett and Carnival, this action-packed high-stakes drama is sure to be an edge-of-your-seat adventure for Peacock audiences.” While, Meghan Lyvers, director of original drama at Sky Studios U.K. and Ireland, added, “we cannot wait to bring this premium, cinematic, globe-trotting series to Sky audiences across Europe.”

The series will be produced by Carnival Films, which is part of NBCUniversal, in association with Sky Studios. Neame along with Nigel Marchant will serve as executive producers for Carnival Films. While Frederick Forsyth will serve as consulting producer on the series along with Christopher Hall as producer. With impeccable talents attached behind the camera and a globetrotting, cat-and-mouse chase approach of the series, The Day of the Jackal seems like a thriller to watch out for.

The Day of the Jackal will be available on Peacock in the US and on Sky in the UK, Ireland, Italy, Germany, Switzerland, and Austria, though there is no official release date yet. You can check out the trailer for the 1973 movie down below: