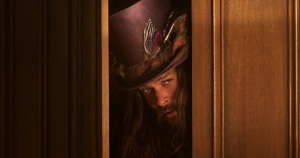 Netflix has just released some enchanting new character posters for their upcoming film Slumberland, which is set to be released this month. The new fantasy film will explore an enchanted world full of fantastic characters. On the new posters, we get a good look at the main character Nemo; Pig, a stuffed pig that comes to life at night; Flip, a half-man half-monster outlaw; and Agent Green, a 160-year-old dream cop.

Slumberland tells the story of a precocious young girl named Nemo (Marlow Barkley) whose father is lost at sea. Pulled away from her idyllic Pacific Northwest existence living in a lighthouse with her father, Nemo goes to live with her uncle Phillip (Chris O’Dowd) in the cold, gray city. Nemo feels out of place in her new home and in her new routine. But one night, she is transported to the magical world of Slumberland, where a magical new friend named Flip (Jason Momoa) guides her through an all-new world of exploration. Nemo, Flip, and her stuffed animal, Pig, will explore the vast expanse of Slumberland in search of her lost father.

The new character posters give us a look at the magical characters to be featured in the new movie. Flip is shown with goat horns in a heavy coat. He holds a map in his hands and points out, just past the viewer, toward a new adventure. Behind him is a futuristic cityscape. The second poster shows Weruche Opia dressed in a snazzy green hounds tooth suit, wearing a badge, and putting on some sunglasses. Pig, the stuffed pig, is shown in the third character poster, stuffed into Nemo’s backpack. A character poster featuring Nemo was also released, showing Nemo and Pig exploring Slumberland.

Slumberland is directed by Francis Lawrence the film was written by David Guion and Michael Handelman. The film is produced by Peter Chernin, Jenno Topping, David Ready, and Lawrence. The film is executive produced by Guion, Handelman, and Ray Angelic. Rounding out the cast are Kyle Chandler, India de Beaufort, and Humberly González.

Slumberland is sure to be a treat for the whole family and, judging by the new trailer, it might also prove to be a tearjerker. So make sure to watch with some tissues. Slumberland is set to be released to Netflix on November 18, 2022. You can take a look at the new posters and the trailer for the film below.