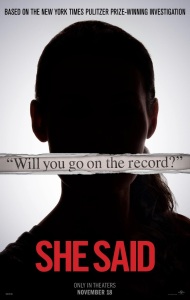 Universal has unveiled a new featurette detailing the making of, and the background to, their new film She Said, which is based on the book of the same name by Jodi Kantor and Megan Twohey. The film stars Zoe Kazan and Carey Mulligan as the two investigate reporters working for the New York Times, who broke one of the most vital news stories in modern history.

The newspaper investigation was completed by Twohey, Kantor and Rebecca Corbett, while the former two co-wrote the New York Times bestselling nonfiction exposé She Said: Breaking the Sexual Harassment Story That Helped Ignite a Movement. The featurette includes interviews with stars Mulligan and Kazan, as well as the real life Kantor and Twohey.

“This story is not about the #MeToo movement and it’s not about what happened after, it’s about how the story was built,” said Kazan in the featurette, while Mulligan offers the take that ‘It’s interesting to tell a part of history which hasn’t been told, and it was a wonderful way of honouring what they did.” Mulligan is a two-time Academy Award nominee for her performances in Promising Young Woman and An Education, while Kazan is an Emmy Award nominee and has appeared in projects like The Plot Against America and The Big Sick.

Through high-pressure and high-stakes investigation, combined with guts and bravery, the two women were able to complete the story that brought wider awareness to the #MeToo movement, and in doing so, brought to public light the years of sexual criminality enforced upon women by the former movie mogul, Harvey Weinstein. In the aftermath of their work, many more women came forward to speak openly about the sexual assault they had suffered over the years, in silence, as a result of trying to maintain their careers. Weinstein is now currently serving a 23 year sentence in prison, for felony sex crimes, and continues to appear in court for countless more crimes.

She Said opens in theaters on November 18, and the featurette is available to watch in full below: