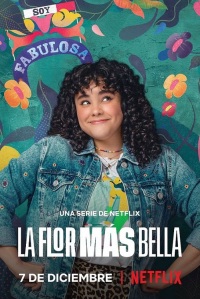 Netflix has just released a trailer for an upcoming Spanish-language series called The Most Beautiful Flower (La Flor Más Bella). Starring Esmeralda Soto, the show follows the fashionable and fabulous Mich as she tries to navigate high school and its dizzying social expectations, family traditions, and love octagons (think love triangles taken to the next level.) With confidence, passion, and lots of self-love, Mich is determined to become the best version of herself, even if she doesn’t really know what she is doing.

The trailer opens with Mich introducing herself in Spanish, saying “I’m Mich. I’m fabulous. I’m popular. Okay, I’m not all that yet. But I’m about to make it.” The rest of the trailer follows her various exploits and mischief as she tries to gain popularity and is finally recognized for the fabulous person that she is. At one point in the trailer, Mich’s friends give her a pep-talk and tell her “You are not a blue-eyed warrior. You are not a size zero. You’re beautiful.” Mich’s love life gets a complicated twist when she is then introduced to a mysterious new student called Majo, with whom she has a flirtation with. In the next clip, Mich dramatically cries out “Oy, octágono amoroso!”, which means “Love octagon!” The trailer promises a delightful coming-of-age story that is full of comedy, drama, romance, and plenty of self-love.

The series is inspired by the teenage years of Mexican comedian Michelle Rodríguez, who also serves as co-creator of the series alongside screenwriter Fernanda Eguiarte (Don’t Blame Karma!). By putting a humorous spin on real challenges that teenagers face, the series conveys a message about the importance of tackling labels, believing in yourself, and learning how to shine in order to achieve your goals.

The show takes place in the vibrant Xochimilco, Mexico and features cast members Soto, Isabel Yudice, Alicia Veìlez, Michelle Olvera, Luis Fernando Peña, Germaìn Bracco, and more. It is directed by Salvador Espinosa and Rodriguez, and is executive produced by Jaime Daìvila, Diana Mejiîa-Jones, and Wendy Cortez. The series will contain a total of 10 episodes, with each episode running for 30 minutes. The series is in Spanish, but English dubbing and subtitling will be available as well.

The Most Beautiful Flower (La Flor Más Bella) premieres on Netflix on December 7. Checkout the official trailer and synopsis below:

Curvy, confident, and with awesome hair, Mich is well aware that she is fabulous. Now, she just needs to get everyone at school to see it too – if only it were that easy. This vibrant comedy is inspired by the life of its creator, comedian Michelle Rodriìguez, who grew up in Xochimilco, Mexico.