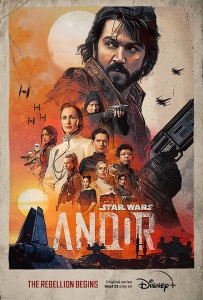 As sad as it is to say, the season finale of Andor will soon be upon us. To celebrate the conclusion of the acclaimed Star Wars series, The Walt Disney Company is opening up the series to a whole new group of viewers. This Thanksgiving weekend, the first two episodes of the Disney+ will air on ABC, FX, and Freeform, and will be available to stream on Hulu.

Andor gives Star Wars fans a look at the galaxy as they’ve never seen it before. Set five years before Star Wars: Episode IV – A New Hope, the series follows Diego Luna’s Cassian Andor as he embarks on a journey that will turn him into the rebel hero audiences fell in love with in Rogue One: A Star Wars Story. Andor details the growing powder keg that is the galaxy as the Empire grows more and more ruthless—setting the groundwork for the creation of the Rebel Alliance seen in the Original Trilogy.

Audiences will be able to watch the first two episodes ,“Kassa” and “That Would Be Me,” first on ABC on November 23, then on FX on November 24, and finally on Freeform on November 25. Additionally, the two episodes will be available to stream on Hulu for a limited time after November 23. These first two episodes hit the ground running with Cassian finding himself in the crosshairs of the authorities after an effort to find his missing sister turns ugly. Through flashbacks, the episodes also explore Cassian’s never-before-seen origins as a child on a remote planet.

The first ten episodes of Andor are currently available to stream on Disney+. Episode twelve, the season finale, begins streaming on November 23. Watch the trailer for Andor below, and check out the full airing schedule for these special presentations of Andor:

Hulu: Available from November 23 through December 7