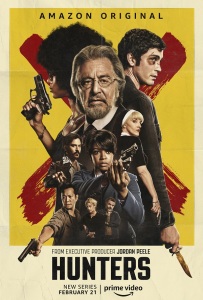 After a long wait, word is finally out on when we will return to the alternate post-World War II world of David Weil‘s conspiracy drama, Hunters. Two years after the show was picked up for a second season, Prime Video has now announced, via Entertainment Weekly, that the second season is set to premiere on its platform on January 13. Additionally, Prime Video has offered a first look at the upcoming season, which shows its titular hunters back on their quest to sniff out Nazis where ever they may be hiding and ultimately truncate ongoing plans for a Fourth Reich. Unfortunately, Season 2 will also be the show’s last, but on a brighter note, creator Weil has promised viewers that it will be worthwhile. For starters, more hunters have been introduced to step up the intrigue.

Hunters follows the titular Nazi hunters, who team up to hunt down Nazi war criminals whom they learn are working underground to plot a Fourth Reich that will take root in the United States. The Season 1 finale saw the hunters sort of part ways and go after other interests, however, the upcoming season will see them dust off their shoes and get back in the saddle after the discovery that not only is Adolf Hitler alive, but his plans for a Fourth Reich are progressing. With little time on their hands, the hunters must work harder than ever to frustrate Hitler’s plans. German actor Udo Kier has big shoes to fill, as he will be taking on the role of the dictator.

Weil also revealed that Season 2 will explore dual timelines. In addition to the main timeline detailed above, the show will also take viewers back to past events that will see the return of Al Pacino in his role as Meyer Offerman, aka The Wolf. In the first season, Offerman was killed by fellow hunter Jonah Heidelbaum (Logan Lerman) after he discovered his true identity as a Nazi undercover. Viewers will now get to see how The Wolf was able to get by unnoticed until that scene.

In the second season, Weil promises to deliver a satisfying end to the dictator, telling EW, “I would only ever invoke Hitler if we’re going to deliver justice in some hopefully satisfying way.” Lerman, Jerrika Hinton, Josh Radnor, Tiffany Boone, and Kate Mulvany all return to reprise their roles as the main Nazi hunters. Also joining in new roles are Jennifer Jason Leigh (Atypical), Chava Apfelbaum, Tommy Martinez (Good Trouble), and Emily Rudd.

Season 2 of Hunters will premiere on Prime Video on January 13. Season 1 is currently available to stream on the platform.