Synopsis – A nun prepares to perform an exorcism and comes face to face with a demonic force with mysterious ties to her past.

My Take – Films based on exorcisms stories have been around for decades, yet with the exception of the genre staple The Exorcist (1973), and director James Wan‘s excellent The Conjuring (2013) and The Conjuring 2 (2016), few have managed to be particularly memorable.

While one would have expected this latest attempt to be a little different considering it has director Daniel Stamm at the helm, who about 12 years ago had managed a decent offering in the form of The Last Exorcism (2010), unfortunately, despite an interesting set up it ends up becoming yet another exorcism picture that doesn’t do much to impress.

Originally set for a release under the title The Devil’s Light last year, there are no thrills or surprises in how director Stamm and writers Robert Zappia, Earl Richey Jones and Todd R. Jones handle the film, as the story rarely takes any unique routes and the twists that are meant to feel unexpected end up being utterly predictable and typical.

Sure, there are promising glimmers of a better film here, boasting some pretty gnarly and violent imagery, but beyond that there’s very little here to stand out. The actors give it their all but they really don’t have anything to work with, as all the development was given to the themes and no room was left to tell us anything specific about the characters as they are in the present.

As a result, in a year consisting of strong horror offerings, this one manages to be very forgettable experience, especially with its generic approach and lackluster execution, making it yet another worthless possession story. 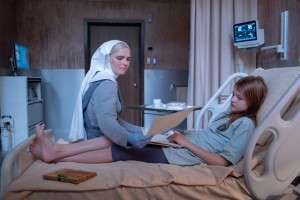 The story follows Sister Ann (Jacqueline Byers), who is employed at an exorcism school, which the Catholic Church reopened to train new priests in the Rite of Exorcism and fight back against the global rise in demonic possessions. But even though Nuns are forbidden from performing this ritual, Father Quinn (Colin Salmon) recognizes Sister Ann’s gifts, including empathy with possessed victims of demons, and agrees to train her.

However, Ann is thrust onto the spiritual front line with fellow student Father Dante (Christian Navarro) when she finds herself in a battle for the soul of a young girl named Natalie (Posy Taylor), who she believes is possessed by the same demon who tormented Ann’s mentally unstable mother years ago.

The film actually does have a sufficiently unique and compelling take on the possession sub-genre. The idea of a world where demonic possessions are a regular occurrence is a terrifying. Just the thought of an underground area where priests-in-training try to help those currently under dark possessions and learn the practice is pretty unsettling. Even a unique look into the Catholic Church’s ideology and education surrounding exorcism make for an excellent set up.

Yet, the film rarely breaks past the surface when it comes to how it handles its horror and character potential making the experience lack engagement past initial moments, recycling horror ideas without executing them in an interesting way. When things like the underground exorcism facility and the Vatican’s history of failed exorcisms are unearthed, they evoke some good atmospheric horror but are just not strong enough to last.

Early on, the script introduces character background and thematic depth that causes the plot to largely be driven by an emotional core. Ideas like loneliness, grief, longing and forgiveness have long been staples of the horror genre but the film does absolutely nothing new or interesting with this, instead molding everything into a patchwork of mundane mediocrity. The film is nowhere near clever enough to actually re-contextualize or provide false flags to what’s going on, instead deciding to spend most of its time exploring Sister Ann’s background and upbringing instead, only adding further weight to what anyone could have guessed early on.

Even the sheer concept of Sister Ann breaking gender roles by joining the priests in their exorcism classes and finding self-empowerment in her fight against evil comes off super weak because of how thin and basic the execution is. There’s this whole connection built between Sister Ann and Natalie as well as a secret from Sister Ann’s past that results in a pretty standard twist that attempts to add more emotional stakes but fails to really do so.

Although the film tries to hint that a future story could happen and that things aren’t exactly closed and shut, there’s nothing that makes you really want to see more.

Yes, there are some skin-crawling visuals and moments with the film’s generic demon that are kind of cool, especially in the exorcism sequences, but there’s rarely a memorable scare and you can see a lot of them coming from a mile away. And even with a few neat practical feats of body horror, it isn’t enough for me to have gotten scared throughout its brisk 93 minute runtime.

But if there is one thing going for the film, it is Jacqueline Byers. As Sister Ann, a nun who feels called to be the first female exorcist, the actress is a joy to watch, and you root for her character. Young actress Posy Taylor also manages to do well, sweet at times and disturbing at others.

It’s nice to see Christian Navarro (13 Reasons Why) here, too, although the material never allows this otherwise compelling actor to fully come across as believable in the role of a priest. In other roles, Colin Salmon, Virginia Madsen, Lisa Palfrey, Nicholas Ralph and the late Ben Cross are wasted. On the whole, ‘Prey for the Devil’ is yet another lackluster exorcism feature that is poorly-crafted and never takes advantage of its potential premise.