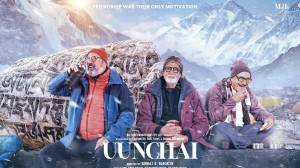 Synopsis – Uunchai is the story of three friends who take a trek to the Everest Base Camp. A simple trek turns out to be a personal, emotional and spiritual journey as they battle their physical limitations and discover the true meaning of freedom.

My Take – Known primarily for their ensemble family dramas, Rajshri Productions have ruled the Hindi cinema roster for decades, especially due to the ones helmed by director Sooraj Barjatya, who made his directorial debut with the blockbuster hit Maine Pyar Kiya (1989) and further established his status as a filmmaker with subsequent releases Hum Aapke Hain Koun..! (1994), Hum Saath-Saath Hain (1999) and Vivah (2006), with a single blip in the form of Main Prem Ki Diwani Hoon (2003).

Now returning to direction after seven long years, following the below par yet turned money spinner Prem Ratan Dhan Payo (2015), Barjatya brings forth yet another cocktail of emotions, but unlike his earlier family dramas that were mounted on a large scale with a backdrop of a family wedding or a love story, his latest is a road trip adventure that celebrates friendship and hope.

Written by Abhishek Dixit, from a story from Sunil Gandhi, without a doubt his latest too contains all those familiar trademark Sooraj Barjatya features, however, mainly due to his simplistic approach to film making, the overall experience ends up feeling rather refreshingly different and enjoyable. Backed by an ensemble of veterans lead by the ever legendary Amitabh Bachchan, this one has been clearly made with a lot of heart and a whole lot of nostalgia.

Yes, while it avoids the usual melodrama that his kind of films tend to lapse into, he can’t resist the temptation to stretch the overall length to at least 30 minutes more than it should have been. Sure, the familiar clichés and predictability are also there, yet the film manages to connect on an emotional level at many points, especially as it celebrates life at higher altitudes and delves into promises made to your loved ones and most importantly yourself.

The story follows Amit (Amitabh Bachchan), Javed (Boman Irani), and Om (Anupam Kher), three aged friends, who have just lost the fourth member of their gang, Bhupen (Danny Dengzogpa), to a stroke despite supposedly being the most disciplined and physically fit among them. Deeply affected by Bhupen’s loss, Amit ends up convincing both Javed and Om to help him fulfill their dead friend’s last wish of trekking to the Everest base camp. Preferring a road trip, the trio are accompanied by Shabina (Neena Gupta), Javed’s wife, till Kanpur, and are later joined by a stranger named Mala (Sarika) to Kathmandu.

Battling physical and mental limitations, on the first trek of their lives, the trio embark on a journey full of uncertainties and hardships, all the while discover the true meaning of freedom by holding themselves accountable for their past mistakes. With a young guide named Shraddha (Parineeti Chopra) at their side, their mission to fulfill their friend’s last wish instead turns into a novel exploration of life.

As one would expect, there are many life lessons packed into this road trip. Even though the film shows the demise of Bhupen quite early, its tone remains light-hearted throughout with plenty of humor sprinkled throughout. In a way, this film is the Zindagi Na Milegi Dobara (2011) version of the elderly. Because all the friends belong to different zones in their lives and are marred by flaws that need to be fixed or addressed. And over the course of this adventure, they face their fears and admit their shortcomings.

The film starts hitting with some heart-wrenching moments when the characters realize how their lives have changed. Each character has their own problem and their own battle to fight. From dealing with their past mistakes and insecurities to finding their inner freedom, every character finds its closure in the end as they go on this embarking journey.

For once we have a narrative that addresses the concerns of the aged without finding faults in the present generation. It talks of friendships that are not measured on the scales of give and take. This messaging is ensconced in a story line that is not consistently gripping, but not preachy either. It also helps that Amit Trivedi’s music elevates the film’s emotional graph in many places.

The hurdle, however, is the pacing as director Barjatya spends too much time on the stopovers. The film starts from Delhi, crosses Kanpur, Agra, and Gorakhpur before reaching Kathmandu, and before the actual trek begins, we are into 80 per cent of the film. The film then inflates its length to make up for lost time, and as a result becomes dreary. The film could have been cut by 30 minutes as it feels slightly stretched in the second half.

However, it helps that Amitabh Bachchan, Anupam Kher and Boman Irani are a riot together. Their camaraderie is instantly pleasing, and the finesse and expertise they bring to the screen in unmatched. The trio have so much experience that they just can’t go wrong, even in regular scenes. Together, they are a wholesome package of entertainment.

It also helps that they are ably supported by Neena Gupta, Sarika and Danny Dengzogpa, who manage to string hearts. Parineeti Chopra too gets a scene or two to shine. In smaller roles, Nafisa Ali and Raju Kher are effective. On the whole, ‘Uunchai’ is a familiar yet heartwarming tale that celebrates friendship and the linked emotion of loss.