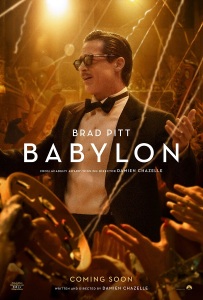 A new featurette for director Damien Chazelle’s upcoming epic Babylon highlights the “depravity and debauchery” of early Hollywood. In the two-minute video, titled “Welcome to Babylon” and shared by Paramount Pictures, Chazelle describes the film as “the biggest thing” that he has ever attempted. Babylon marks another leveling-up for the Oscar-winning filmmaker, who broke out with the intense drama Whiplash, and attained icon status with the musical La La Land.

The film is set during a particularly volatile time in the history of Hollywood, when the film industry was transitioning from the silent era to the talkies. The film is told through the perspective of a lowly assistant named Manny, played by newcomer Diego Calva. “He’s our guide through the story,” Chazelle says. “He’s our eyes and ears through an outsider’s point of view.” Also featured in the cast are more popular stars such as Margot Robbie and Brad Pitt, who are reuniting after working together some years ago on another Tinseltown-set epic, Quentin Tarantino’s Once Upon a Time in Hollywood.

“The story follows multiple characters who have an ambition to be a part of something bigger than themselves,” says Pitt in the video, over shots of his movie star character Jack Conrad driving through the desert in a glistening car. Robbie, meanwhile, describes her character Nellie as “a tornado.” Nellie is a determined young actress, who is proud of the fact that she got her foot in the door on her own terms. Pitt concludes by calling the film a real “epic.” He added, “It’s funny at times, it’s sexy at times; the film is so big,” over shots of wild parties, car chases, and a random crocodile. We also see glimpses of the central characters working on a period epic in the desert, and engaging in all sorts of questionable behavior as they fight to make themselves seen and heard amid the chaos.

Babylon held its first screenings a few days ago, with the first reactions teasing a “cocaine-cooked” romp that divided audiences right down the middle. Chazelle made his debut with the lowkey Guy and Madeline on a Park Bench, but it was only after Whiplash that he became a force to be reckoned with in the industry. He validated expectations with La La Land, for which he became the youngest-ever winner of the Best Director Oscar. Chazelle’s last film was the unconventional Neil Armstrong biopic First Man, which was as stunning as anything that he has ever made, but bombed at the box office, which greatly impacted its performance in the awards season.

From Damien Chazelle, BABYLON is an original epic set in 1920s Los Angeles led by Brad Pitt, Margot Robbie and Diego Calva, with an ensemble cast including Jovan Adepo, Li Jun Li and Jean Smart. A tale of outsized ambition and outrageous excess, it traces the rise and fall of multiple characters during an era of unbridled decadence and depravity in early Hollywood.