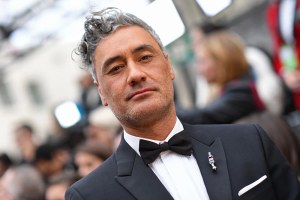 Fans have finally gotten their first look at Taika Waititi‘s newest movie, Next Goal Wins. EW released the first images for the upcoming film which stars Michael Fassbender as Thomas Rongen, a Dutch soccer coach who finds himself on the other side of the world put in charge of the planet’s worst soccer team.

Following a world-record defeat for a competitive international football match, the American Samoa national team looked to recover from their humiliating 31-0 defeat to Australia by bringing in a coach with new ideas. The move to appoint Rongen was covered in a 2014 documentary of the same name, and Waititi saw enough potential in the story to make his own feature from it.

“Years ago, I watched it and couldn’t believe I’d never heard of this story before,” said Waititi, who has just come off Thor: Love and Thunder which released in the summer. “I’d never made a sports film before, and I really wanted to try that out. It’s about a sport I don’t know that much about. Rugby is the national sport in New Zealand, but it’s about underdogs, and I just love underdog stories. Most of my films are about people who live on the margins, or are a little bit left out, and it just fit right in for me. It’s a true story, but it’s got all the elements that all the great sports films have. It’s basically the Cool Runnings of soccer.”

Fassbender will be playing Rongen, who, as Waititi explains, was the only one to answer the team’s call for a new coach, “He had a pretty good playing career, and then he had a bunch of coaching jobs in the States. He was really the only person who answered the call. He was the one who said, ‘Yeah, I’ll go down there and give it a go.'”

In addition to Fassbender, the film also features Elisabeth Moss and Will Arnett, as Rongen’s ex-wife, and a soccer executive respectively. Samoan-New Zealand actor Oscar Kightley also features, playing the head of American Samoa’s soccer federation, as well as Kamaina, who plays the trans football player Jaiyah Saelua. Of Jaiya, Waititi says: “Jaiya is a trans player — one of the star players of the team — and a lot of the film revolves around her relationship with Thomas Rongen.”

Next Goal Wins opens in theaters on April 21. Check out EW‘s exclusive new images below: