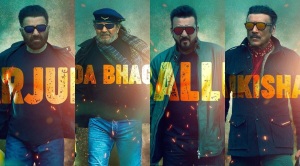 Not too long ago, it was announced that the 90s stars Sanjay Dutt, Jackie Shroff, Sunny Deol, Mithun Chakraborty will be coming together for a film together, which has been titled Baap. While the trio is known for their share of action films, veteran actor Mithun too has been a part of many of these commercial masala maar-daad entertainers. While the four stars coming together had created ample buzz, adding more to the anticipation, the makers unveiled a special behind-the-scenes (BTS) video of the kind of stunts and action we can expect from this quintessential Bollywood film.

Giving the feel of 90s potboilers, the recently released BTS video from Baap features the adrenaline pumping stunts by Sanjay Dutt, Sunny Deol, and Jackie Shroff. The actors have been a part of many such typical Bollywood action entertainers in the past. While Sunny was known for his performances in action films like Ghatak and Ghayal, Sanjay Dutt and Jackie Shroff too have done a fair share of such films. Reviving their action avatars, the recent video featured them doing some power packed punches and even showcased bits and pieces of high Bollywood drama you will get to witness in the film. Taking to their Instagram, the video was posted with a caption that read, “Parde par yeh kare kamaal, aur parde ke peeche? Khud hi dekh lo..?? Full-on dhamaal, bawaal aur masti bemisaal. ?? Here’s your sneak peek into the sets of this #BaapOfAllFilm.

Earlier this month, the makers had also shared character posters of the four stars wherein they also unveiled their reel-life names in the film. While Sanjay Dutt will be seen in the role of Ballu, Mithun Chakraborty is named as Yeda Bhagat. Sunny Deol will reprise his name as Arjun whereas Jackie Shroff is Jaikishan. Interestingly, Sunny Deol also featured in a film titled Arjun, in which he played the titular role.

Coming to the film, Baap will be directed by Vivek Chauhan and will be produced by Ahmed Khan and Shaira Ahmed Khan in association with Zee Studios.