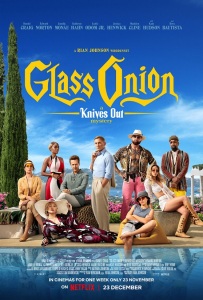 It has been an extremely hot year for the murder mystery genre and 2022 is ending in an explosive bang with Rian Johnson’s highly anticipated Knives Out sequel, Glass Onion: A Knives Out Mystery. The whodunit film that features the return of Daniel Craig’s Detective Benoit Blanc is coming to Netflix on December 23. Now, while promoting the film at CCXP, Netflix has released a new behind-the-scenes look that gives fans a juicy taste of what they should expect from Blanc’s latest thrilling caper.

The video, which opens with introductions from Johnson, Craig, Kate Hudson, Edward Norton, Janelle Monáe, and the rest of the cast, has many layers to it. Johnson first goes into how excited he was to be stepping into this world again. He was craving to dive back into another mystery while Craig talked about how coming back was a “no-brainer”. The behind-the-scenes look also goes into all the different character dynamics. It teases how each character involved in this murder mystery party is on the edge of their seat just like the audience will be when they watch the film. The title Glass Onion is at the center of the conversation as well and has many different meanings throughout the sequel besides its blatant physical form.

However, the main focus of the video was seeing how much fun Glass Onion was to make for the cast and crew which, again, will certainly rub off on its audience more and more as the mystery gets closer to being solved. The best murder mysteries keep you guessing till the very end. That’s until it finally pulls the satisfying rug out from under you revealing its true intentions were completely different from anything you could’ve imagined. Like its amazing twisty predecessor, that’s exactly what Glass Onion sets out to do.

The sequel which has had a successful cinematic run was commended for achieving the impossible by crafting a mystery that holds the same zany fun spirit as Knives Out, but it never attempts the same trick twice. In the vein of Agatha Christie, Glass Onion is its unique blend of insanely suspenseful entertainment. It’s hilarious, extremely tense, immaculately shot, has a brilliant ensemble cast, and is creatively structured. While Knives Out was a blissful commentary on toxic families, its sequel is all about toxic friendships and the dangers that come from influencer culture.

With rave reviews from both critics and moviegoers alike, along with a healthy box office return in its limited theatrical run, the world can’t get enough of Benoit Blanc. Until Glass Onion: A Knives Out Mystery releases on Netflix December 23, you can view the new CCXP behind-the-scenes look at the film down below.