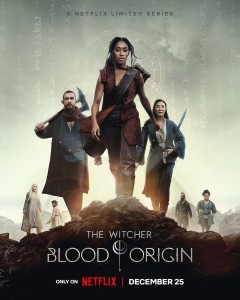 Collider can exclusively present a new The Witcher: Blood Origin introducing Laurence O’Fuarain as Fjall, a disgraced warrior searching for redemption. Fjall is one of the three main characters of the prequel to The Witcher, which also counts Sophia Brown as Éile and Michelle Yeoh as Scian.

The exclusive video reveals some scenes centered on Fjall’s journey. As the video tells us, Fjall Stonehearth broke an oath and betrayed his homeland, and for that, he’s cast out by his clan. The video also reveals the person who banishes Fjall and condemns him to be forgotten is none other than his father, which adds another layer of tragedy to Fjall’s story.

In the video, O’Fuarain also details his character background, telling fans that Fjall is initially a member of a clan dedicated to protecting royals, a mission that led him to train in combat since he was a child. The people of Fjall’s clan are forced to fight from a very young age, suffering all kinds of emotional abuse to shape them into “obedient warriors” who are taught “not to ask questions, and follow orders.” As a result, Fjall is the perfect killing machine, but once he finds himself alone in the world, he’ll have a hard time figuring out who he really is.

During his journey, Fjall joins Éile, a rival clan member who abandons her post. The many clans of Blood Origins are in constant war, which means Fjall and Éile will have a hard time trusting each other. Still, they’ll learn to work together while they figure out what’s happening to the lands.

How Blood Origin Fits in The Witcher Universe?

Set 1200 years before The Witcher, Blood Origin will tell the story of the Conjunction of Spheres, the event that led to overlapping the dimensions of elves, dwarves, humans, and monsters. That means the prequel will reveal the origins of The Witcher world. That’s a massive jump into the past because, so far, we only stepped back a few decades for the animated feature spinoff The Witcher: Nightmare of the Wolf, which tells the origin story of Vesemir, the man who trained Geralt of Rivia (Henry Cavill).

The Witcher: Nightmare of the Wolf and the first two seasons of The Witcher are available right now on Netflix. The streaming platform will gift us The Witcher: Blood Origin for Christmas on December 25. Check out the exclusive video and the series synopsis below.

Every story has a beginning. Witness the untold history of the Continent with The Witcher: Blood Origin, a new prequel series set in an elven world 1200 years before the events of The Witcher. Blood Origin will tell a story lost to time – exploring the creation of the first prototype Witcher, and the events that lead to the pivotal “Conjunction of the Spheres,” when the worlds of monsters, men, and elves merged to become one.