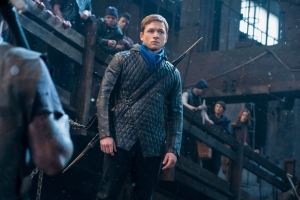 One of Taron Egerton‘s next roles will be as an arson investigator. Apple TV+ has announced that Egerton will star in the upcoming drama series Firebug, which will follow Egerton‘s character, who works with a detective to find two serial arsonists. Egerton will also serve as an executive producer for the series.

Black Bird creator Dennis Lehane is developing Firebug. He will also be a writer and executive producer for the series. Lehane‘s other work includes HBO‘s The Outsider and Audience‘s Mr. Mercedes. “With somebody like Dennis, who is in the big leagues, it’s just like if acting’s turning up to a fight, it’s like being given all the best weapons, you’ve got these incredible tools,” Egerton previously told Collider about working with Lehane on Black Bird. “Dennis is the kind of writing where you want to speak it as you’re reading it, if you are con if you are being presented with an offer to play one of his characters, because the words are so great. They just feel like they’re just so great. It’s so lean, Dennis‘ writing is in no way fatty, and it’s so active as well. It’s language being used rather than just describing. I loved working with him.” Egerton also described working with Lehane on Black Bird as an “amazing experience.”

No official release date has been announced for when Firebug will premiere on Apple TV+. Fans can watch Egerton‘s and Lehane‘s previous collaboration in Black Bird, which is currently available on the streaming service.