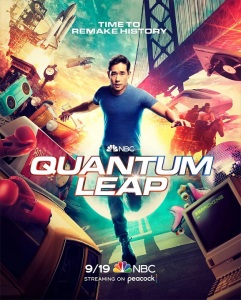 Set 30 years after Dr. Sam Becket (Scott Bakula) NBC’s Quantum Leap has been restarted with a new team to understand many of its questions still unanswered to this day.

This time the story follows the exploits of Dr. Ben Song, the top-secret government project’s new lead physicist, played by Raymond Lee (The Lost City, Top Gun: Maverick). The Quantum Leap’s accelerator has now been upgraded with a new program code and as the doctor makes an unauthorized leap into the past, similar to what happened to Dr. Sam Becket, he awakes in a different time and loses some of his memory. He realizes that he is lost in the past and temporarily takes over the lives of other people, and makes things right in their lives while changing history. He is guided by Addison Augustine, played by Caitlin Bassett, another project employee, as a hologram that only he can see and hear.

The reboot of the 90s science fiction series of the same name has been so well-received that a second season has been confirmed. Lisa Katz, president of Scripted Content at NBCUniversal Television and Streaming, said in a statement, “We’re leaping into a second season thanks to the incredible work by our cast, producers, writers and everyone who has played a role in giving this iconic NBC series a new life.” The show has become one of the network’s best-ever dramas launched on Peacock, and is the #2 new broadcast show of the season in the 18-49 demographic, with an average 10.8 million viewers across linear, digital and streaming platforms.

“As we continue to bring audiences to our must-watch dramas, it’s gratifying to know Quantum Leap will have a prominent place next season both on our NBC schedule and next day on Peacock,” she added. The original series, which first aired in 1989, was a cult favorite with 17 awards including awards from the Primetime Emmy‘s and Golden Globes. The 2022 is expected to fair well with the audiences. There were 13 episodes originally ordered for Season 1, broken into two parts with a hiatus in between. On October 2022, NBC ordered six more, bringing it to a total of 19 episodes for its first season.

Other cast members of Quantum Leap are Nanrisa Lee (CSI: Vegas), who plays Jenn Chu, Mason Alexander Park (Cowboy Bebop) who plays Dr. Ian Wright, the Quantum Leap Artificial Intelligence Chief Architect, and Ernie Hudson (Ghostbusters) as the head of the time travel project, Herbert “Magic” Williams, a character on the original series in which Dr. Sam Becket leaped into to save his brother from dying.

Quantum Leap is under the umbrella of Universal Television, a division of Universal Studio Group, produced in association with I Have an Idea! Entertainment, Belisarius Productions and Quinn’s House Productions. Martin Gero is the executive producer along with Dean Georgaris, Don Bellisario, Deborah Pratt, Chris Grismer, Steven Lilien and Bryan Wynbrandt.

Quantum Leap is currently in hiatus. Season 1 will be back on January 2, 2023.