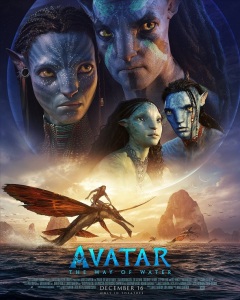 A common refrain in most reviews of Avatar: The Way of Water is this: you never, ever bet against James Cameron. Over the years, the director has delivered all-timers that have fundamentally changed the industry. Two of his films — Avatar and Titanic — are among the top three most financially successful movies ever made. And it’s looking like the naysayers are going to bite the dust once again. According to The Hollywood Reporter, The Way of Water is poised to deliver the biggest opening at the worldwide box office this year.

The film is currently tracking to open between $150 million and $175 million in its debut weekend at the domestic box office, and with between $450 million and $550 million globally. The year’s biggest worldwide opening was delivered by Doctor Strange in the Multiverse of Madness ($449 million). Last year’s Spider-Man: No Way Home currently holds the record for the biggest opening weekend of the pandemic-era, with $583 million. Domestically, Doctor Strange 2 made $187 million in its opening weekend. If tracking holds, The Way of Water will outperform hits such as Top Gun: Maverick ($126 million), Jurassic World Dominion ($145 million) and The Batman ($134 million) in its debut weekend.

Cameron himself has said in an earlier interview with GQ that The Water of Water would need to be the third or fourth-biggest movie in history to be counted as a success. Broadly speaking, that means anything below $2 billion globally would probably be considered disappointing. The first Avatar remains the biggest movie of all time, with over $2.9 billion at the global box office.

It’s also important to remember that the first movie didn’t really open big. The film made less than $80 million in its debut weekend in 2009, when it was released a week before director Guy Ritchie’s Sherlock Holmes. The Way of Water will face no such competition; instead, its biggest competition will likely be its own three-hour-plus run time. Studios cleared the runway for it two weeks ago, and will allow it the room to perform well into 2023. The film will face its first real test perhaps in February, when Marvel’s Ant-Man and the Wasp: Quantumania lands in theaters.

Unlike most Hollywood movies in the post-pandemic era, The Way of Water is getting a day-and-date China release. While sanctions have largely eviscerated interest for imported movies in the Middle Kingdom, Pandora has remained a consistently reliable escape for local audiences. The first Avatar has accumulated over $200 million from China over multiple years. The film’s most recent re-release generated $75 million stateside, further quashing all concerns about its cultural relevance.

Produced on a budget of around $400 million — the number has been disputed, as with the first film — The Way of Water has a lot riding on it. While it’s likely that the third film will be completed and released — Cameron has shot all of it — the planned fourth and fifth movies will only be given the green signal if The Way of Water performs.