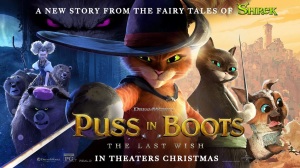 Synopsis – Puss in Boots discovers that his passion for adventure has taken its toll: he has burned through eight of his nine lives. Puss sets out on an epic journey to find the mythical Last Wish and restore his nine lives.

My Take – For about a decade, the ‘Shrek’ franchise undoubtedly dominated the box office, and at the time was the only animated juggernaut franchise which took on the Disney-Pixar series of films despite comparatively diminishing returns and quality, something which visibly sat in with Shrek the Third (2007) and Shrek Forever After (2010).

And though one would have thought that the franchise was dead in the water, at least feature film wise, following the release of its spin off Puss in Boots (2011), an exceedingly ugly and unfunny romp that is best left as a forgotten footnote of DreamWorks’ excellent animated output, eleven years later, the sassy Spanish feline voiced by Antonio Banderas has surprisingly returned for another fairy tale-busting adventure after being stuck in development hell following the release of the latter.

However the bigger surprise is how the sequel significantly improves upon its predecessor, with spectacular animation and a plot worthy of the franchise. Directed by Joel Crawford and Januel Mercado, and written by Paul Fischer, Tommy Swerdlow and Tom Wheeler, the film succeeds in bringing back the familiar yet exciting chaotic energy last seen in Shrek 2 (2004) as it throws in a new set of familiar nursery rhymes and beloved children’s fables to entertaining ends.

While the film is strung around by dynamic animation and lively voice work, its biggest win comes in the form of bravely approaching the topic of death while still delivering wonderful scenes of slapstick, resulting in an exciting and highly amusing effort for both children and adults.

With gorgeous visuals that pop out of the screen, animation that blends 3D and 2D in exhilarating ways to deliver thrilling action scenes, and a poignant yet life-affirming story, this sequel is without a doubt one of the best animated films of the year, and a great return to form for the franchise. 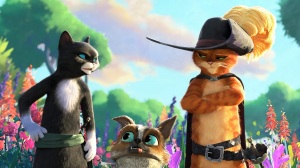 The story follows Puss in Boots (voiced by Antonio Banderas), a cat fugitive from the law and a popular folk hero of San Ricardo, who all these years has been reveling in his legendary status, believing he is invincible. But when he is killed by a freak accident with a church bell following his latest conquest of a giant monster, Puss is made to realize by a doctor (voiced by Anthony Mendez) that he has already spent eight of his nine lives, and that the current one is his last. At first he does not think much of it, but after a traumatic encounter with a threatening and ominous bounty-hunting Wolf (voiced by Wagner Moura), Puss decide to retire from his adventures.

Retreating into a bearded and depressing life of a spoiled lazy lap cat for elderly cat lady Mama Luna (voiced by Da’Vine Joy Randolph), Puss even attracts the unwanted friendship of a therapy support dog Perrito (voiced by Harvey Guillén). However, this seclusion does not prevent the Three Bears crime family (voiced by Ray Winstone, Olivia Colman, and Samson Kayo), led by Goldilocks (voiced by Florence Pugh), from tracking Puss down, with the hopes of recruiting him for a job to hunt down the map to a lost wishing star.

Puss, of course, sees this as an opportunity to wish his lost lives back into existence, and joins a race which reunites him with his love interest Kitty Softpaws (voiced by Salma Hayek) and sets him against the magically gluttonous Jack Horner (voiced by John Mulaney), both of whom have their own agendas for finding the star.

Yes, this makes for an admittedly busy narrative in terms of characters and motivations, but the film is able to keep up with all its players with exceptional pacing, both in terms of story and action, aiming to give Puss some real stakes as he faces his final life. Humor is successful, and heart hits as it should, with Perrito hoping to inspire team friendship as action heats up for Puss and Kitty. The fact that it doesn’t overstay its welcome at a brisk 102 minutes helps, too.

In true Shrek fashion, the films plays with fairy tale characters you may recognize, but in uniquely twisted ways, with the best one being a small role for Jiminy Cricket from Pinocchio, who tries to be the bad guy’s conscience but fails miserably at convincing him to not just murder people. There are also swashbuckling fight scenes that swash and/or buckle rather well. 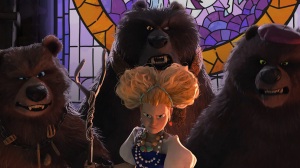 However, everything is in the service of a rather mature and complex story about facing death and embracing life as it follows an adventurer at the tail end of his life. With themes about confronting death and reckoning with some hard truths the film does remarkably well with the heroes and their various issues, finding Puss confronting his mortality, also handling unresolved issues with Kitty, trying to make up for his past cruelty.

But it’s not all doom and gloom, as the story comes off as rather life-affirming with an uplifting message about embracing every day like it’s your last. The writing also pulls off a minor miracle by offering so many antagonists, yet it never feels cluttered or distracted, with each menace provided screen time to explore motivations.

The most obvious upgrade from the previous film is in the animation, which takes inspiration from DreamWorks‘ own success story ‘The Bad Guys’. The combination of 2D and 3D animation meshes well with the painterly storybook aesthetic that the film is obviously aiming for, allowing one to soak in beautiful vistas in the quiet moments and seamlessly ramping up into frenetic action.

Voice Performance wise, Antonio Banderas continues to carry the bravado, arrogance and charisma of Puss, whom we’ve known and loved since he made his first appearance in Shrek 2 (2004). He also shares great chemistry with Selma Hayek who brings her own sexy impudence to the voice of the skillful thief Kitty.

In supporting turns, Florence Pugh, Harvey Guillén, Wagner Moura, Olivia Colman, Ray Winstone, John Mulaney, Da’Vine Joy Randolph, Anthony Mendez and Samson Kayo bring their own range of excellence to their roles. On the whole, ‘Puss in Boots: The Last Wish’ is a very amusing, engaging and visually striking animated sequel that is not only gorgeous but also the second best feature of the franchise.