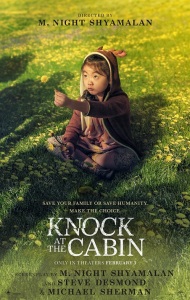 The next film from M. Night Shyamalan, Knock at the Cabin, is set to break into theaters on February 3, 2023. Just ahead of the New Year, the storied writer-director has shared a new poster for the upcoming horror thriller film that sees the silhouettes of the story’s four kidnappers surrounding the titular cabin.

Knock at the Cabin is based on the 2018 novel The Cabin at the End of the World written by Paul Tremblay and tells the story of Andrew (Jonathan Groff) and Eric (Ben Aldridge) who take their adopted daughter Wen (Kristen Cui) on a vacation to an isolated cabin in the woods. While here, Wen is approached by a man named Leonard, played by Dave Bautista, and a group of other strangers played by Rupert Grint, Nikki Amuka-Bird, and Abby Quinn. This group of four, the ones depicted in the poster that Shyamalan shared, take the family hostage and reveal to them that one of them must be sacrificed to save the world. While they initially don’t believe it, the sudden apocalyptic events that start occurring around the world seem to suggest that there might be some sort of truth to what is happening. So, the question is posed: Will they choose to save someone they love or save all of humanity?

The new poster was shared on Twitter by Shyamalan himself, who added in the caption to the post how much he loves the final design. “I love the final poster. Like some old film noir. The graphic posters are my favorite. It’s a throwback film in many ways. Can not wait for you to see it in theaters.” The poster sees the white silhouettes of the four strangers standing around the cabin, towering over the structure as they cast long, crimson shadows against the pitch-black background.

Shyamalan serves as the director on the project as well as screenwriter alongside Steve Desmond and Michael Sherman. Shyamalan also produced the film alongside Marc Bienstock and Ashwin Rajan, with Steven Schneider, Christos V. Konstantakopoulos, and Ashley Fox executive producing.

Knock at the Cabin is set to debut exclusively in theaters on February 3, 2023. You can check out the brand-new poster for the upcoming horror film as well as read its official synopsis down below.

I love the final poster. Like some old film noir. The graphic posters are my favorite. It’s a throwback film in many ways. Can not wait for you to see it in theaters. #KnockAtTheCabin pic.twitter.com/tjJ0QEaUKH

While vacationing at a remote cabin, a young girl and her parents are taken hostage by four armed strangers who demand that the family make an unthinkable choice to avert the apocalypse. With limited access to the outside world, the family must decide what they believe before all is lost.