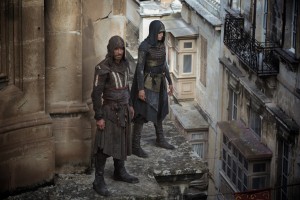 Netflix has been releasing several video game adaptations over the last few years in both animation and live-action that have done a lot to change the idea of video game adaptations being bad. These include critically acclaimed series like Castlevania, Arcane, and most recently the incredible Cyberpunk: Edgerunners. The streaming service also has a number of upcoming projects, among these upcoming projects is a series adaptation of Ubisoft‘s flagship franchise Assassin’s Creed. We previously reported the series would see Die Hard and The Fugitive writer and showrunner of Vikings: Valhalla, Jeb Stuart, acting as series showrunner, but a recent update indicates that he has left the project.

Collider‘s own Steven Weintraub had the opportunity to talk with Stuart about Vikings: Valhalla for Season 2 where he also asked if he was still working on Assassin’s Creed, to which Stuart said he is “no longer involved” in the project. Weintraub followed up with an inquiry about what led to the separation between the two parties, asking if it was a “difference in vision.” Stuart elaborated, saying:

“I think it was a little bit of a move of executives from LA to London, and it allowed the London group who, unfortunately, had to inherit my vision of what it was instead of getting to develop their own vision. So I think that’s fair. I know it’s going to be great whenever it comes out. I think the Ubisoft guys are fantastic. I think it’s a terrific franchise. It was just a good, mutual time to move on for both sides.”

The Ubisoft Forward event from back in September showcased several future projects for the Assassin’s Creed franchise, namely the next mainline video game entry in the series Assassin’s Creed Mirage set in 9th century Baghdad and scheduled to release in 2023. They also previewed an open-world mobile game currently just known as “Codename Jade” set in China as well as an AAA game set in Japan known as “Codename Red” and another AAA game set during the Würzburg Witch Trials called “Codename Hexe.” There were also updates on Assassin’s Creed Infinity, which will be a hub for the historical fiction series in the future.

The live-action Assassin’s Creed series on Netflix is currently in early development. Stay tuned to Collider for future updates on the video game adaptation.