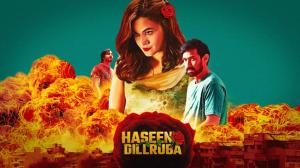 In July last year, Taapsee Pannu hinted at the possibility of the sequel to her 2021 Netflix movie Haseen Dillruba. Now, Vikrant Massey, her co-star from the film, has confirmed that the second part of the movie is indeed happening and it will go on floors soon.

While answering a question about the sequel of the film at an event in IIT (Indian Institute of Technology) Bombay, Vikrant said, “I am confirming that it’s coming.”

Sharing what one can expect from the second instalment of Haseen Dillruba, Vikrant said, “A lot of it is going to be really different. Except for me and Taapsee, there are so many new things. It’s another crazy experience. We had not kept expectations earlier too that it will be so loved, the story, the world around the story. The amount of love we got for the film we thought.”

The actor also revealed that the sequel will go on floors soon. “We had left an interesting open ending buffer for a second part and how we can do that and luckily for us the audience responded and in 15 days now I am going to start the shoot for it. Please do go and watch the film,” he added.

Vikrant has an interesting line-up of projects coming up in the form of Vidhu Vinod Chopra’s 12th Fail, Gaslight, where he is paired opposite Sara Ali Khan, and Sector 36.