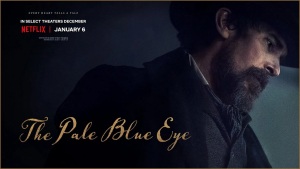 Synopsis – A world-weary detective is hired to investigate the murder of a West Point cadet. Stymied by the cadets’ code of silence, he enlists one of their own to help unravel the case – a young man the world would come to know as Edgar Allan Poe.

My Take – Marking their third collaboration, following their decent rural crime thriller, Out of the Furnace (2013), and the excellent western Hostiles (2017), this time around Christian Bale and writer-director Scott Cooper (Crazy Heart, Antlers) head to snowbound 1830 New York in the form of a gothic crime thriller, featuring the usual macabre of ritually violated corpses and shifty people, but along with a supporting role for a young Edgar Allan Poe, the famous American writer, poet, editor, and literary critic, who plays an important part in solving a very unconventional whodunit.

Adapted from Louis Bayard‘s 2003 novel of the same name, writer-director Scott Cooper‘s passion project, backed by enthralling performances and the chilling beauty of the snowy New York highlands, as expected translates to the film adequately enough to keep viewers invested throughout.

Yet, despite the competency and talent involved in bringing the story to the screen, the film ends up being an underwhelming take on what should have been a masterful mystery. Though it has a lot going for it, what it lacks is the effective exploration, connections as well as the deep emotions and meanings required to telling this tale competently. Most importantly, despite paying clear homage to his works, the film doesn’t capture the twinges of madness that inform some of Poe’s most famous stories.

Sure, writer-director Cooper finds beauty in the macabre with a dark and twisted story, but in comparison his film still pales to some of the other contemporary works in the genre. Still it’s worth a watch if you’re a fan of crime procedurals as it will pass the time pleasantly enough until something actually good comes along. 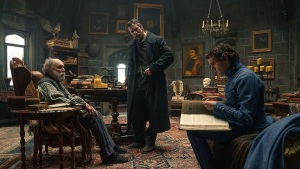 Set in 1830, the story follows Augustus Landor (Christian Bale), a retired widower veteran detective who lives by himself in the woods, ever since his daughter Mathilde ran off, a couple of years previously. Contracted by the United States Military Academy, Landor is forced to come out of retirement to investigate the grisly death of a second-year cadet named Leroy Fry (Matt Helm), who was found hanging with his heart cut out.

As Landor investigates, he unearths possible ties to the occult and begins to have an unspoken confrontational relationship with the members of the school particularly the Marquis family, consisting of Dr. Daniel Marquis (Toby Jones), his wife Julia (Gillian Anderson), and their children, Cadet Artemus Marquis (Harry Lawtey) and Lea Marquis (Lucy Boynton).

Yet, desperate to get some sort of help from an inside man on the campus, Landor ends up enlisting the aid of Edgar Allan Poe (Harry Melling), an intelligent and awkward yet eager young cadet who is destined to become one of America’s most influential authors and the originator of the detective genre.

Here, the film employs a fictional version of the famous poet, and depicts Edgar as a sensitive but intelligent young man, who is eager to take the role of detective with Landor. Without a doubt, Landor and Edgar are the driving force in the story, with their inquiries into the case, which grows murkier as they discover a bad bunch of cadets alongside Fry.

Another murder and a missing persons case adds to their pile, but the film still stays with the two and their banter as they get closer to discovering, who is behind these grisly deaths.

For the first hour or so it’s a deliciously morbid mystery, meticulously unpicked by Landor’s jaded detective and let down only by some inferior American accents from the predominantly British supporting cast. On a purely narrative level, the film offers relatively standard developments – a hidden note here, an unnoticed wound there, an encrypted diary there. We’re dealing with a fundamentally cozy genre, however, and familiarity is allowed and encouraged. Plus writer-director Cooper understands that clichés handled with confidence can be effective. So he leans into them. 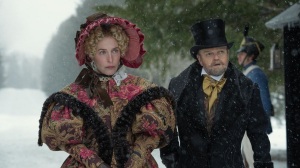 Exposition is delivered with aplomb and it helps that the supporting cast is comically stacked with known performers. In similar manner to writer-director Cooper‘s previous works, the story is heavily reliant on scenes full of dialogue and is very slowly paced despite only an hour and a half going by.

In those ninety minutes, he manages to cram the story full of red herrings and misdirection before the true culprits of the heinous crimes are revealed.

However, writer-director Cooper also struggles at times to nail down the film’s unwieldy tone. Outside of a few scenes, he attempts to ride the whole film in a line between serious terror and gothic camp, but fails to bring enough to either of them, instead stranding the film in an awkward tonal gray zone that never totally works.

And yet amazingly, the film’s climax is a genuinely awesome, totally unexpected yet expertly sold through the clever deployment of information. Unlike a lot of mysteries that are designed to be unsolvable by an audience, the film shows us everything we need to figure it all out and still manages to pull the rug out from under us.

Even so, what ultimately resonates are the picture’s surprisingly moving central relationship and its vivid setting. The cinematography is stunning with stark landscapes and gothic locations with the ice house being the most intriguing, both inside and out. The deep chill can practically be felt through the screen.

Performance wise, Christian Bale is at his minimalist best here and is convincing as the tough, canny detective haunted by the death of his wife and the disappearance of his daughter. Bale is the embodiment of an aging hero, a man weighed down by melancholy who wanders the world searching for meaning. Harry Melling as a truly eccentric Poe is also on good form delivering a performance that is more of a show stealer, particularly due to Melling‘s truly likable act.