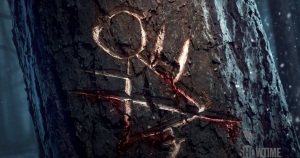 We’re still a while away from the premiere of Yellowjackets Season 2, but as filming progresses Showtime will occasionally tease us about the events of the upcoming episodes. Today, the network revealed a first look at the new character Walter, who is played by none other than Lord of the Rings star Elijah Wood. The new season will continue to follow the two timelines as we discover what went down after the plane crash that changed the lives of an all-girls soccer team, as well as the adult life of the survivors.

The first-look image reveals Wood in character. He looks pretty normal with his hands on his hips, and a hint of shock is on his facial expression. Even though we don’t have many details from Season 2, we know that Wood’s character is a citizen detective, and (at least for now) we’ll only see his adult version since he was not in the plane crash. We can also start speculating about the fact that he’s standing next to Christina Ricci’s Misty, so there are two ways this partnership of citizen detectives can go: She can manipulate the heck out of him, or he can be as… intense as Misty, and form the craziest detective duo we’ve ever seen on television.

Season 2 of Yellowjackets Features a Lot of New Faces

Wood was announced as part of Yellowjackets Season 2 back in August, and at the time of his casting, Showtime revealed that, while he would not be a regular cast member, his character Walter will participate as a guest on a season-long arc. So we can expect to see a lot of him. Wood is joined by newcomers Lauren Ambrose (Servant), Jason Ritter (A Million Little Things), Nuha Jes Izman (FBI), Nicole Maines (Supergirl), François Arnaud (Blindspot), and Nia Sondaya (Truth Be Told).

Series Creators Are as Crazy For Elijah as We Are

In an official statement, series creators and showrunners Ashley Lyle, Bart Nickerson, and Jonathan Lisco celebrated the arrival of Elijah in character and talked a little about having him on set:

“When Elijah agreed to come play on the Yellowjackets team, our minds were blown. We’ve been fans of his for years (in some of our cases, since middle school!) and are delighted to report that his incredible talent is matched only by his kindness, warmth, and enthusiasm for his work. We absolutely cannot wait for the world to meet Walter.”

Yellowjackets has already scored an early renewal for Season 3. This suggests that Showtime is confident that Season 2 will be able to keep its ratings and quality – the series received widespread critical acclaim and was nominated for 7 Emmys. The rest of the cast features Juliette Lewis (The Hateful Eight), Tawny Cypress (Unforgettable), Ella Purnell (Sweetbitter), Samantha Hanratty (Shameless), Sophie Thatcher (Prospect), Sophie Nélisse (The Book Thief), Steven Krueger (The Originals), Kevin Alves (Locke and Key), and Warren Kole (Shades of Blue).