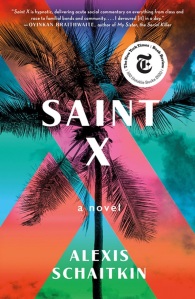 Almost a year after Hulu ordered its Saint X adaptation to series, the streamer released the first images of its main cast members in the upcoming show. Set to be the latest among the streamer’s myriad of recent novel adaptations, the series is based on Alexis Schaitkin‘s 2020 debut psychological thriller and stars Alycia Debnam-Carey, Josh Bonzie​​​​​​, Jayden Elijah, West Duchovny, Betsy Brandt, and Michael Park. The images also come as the show sets a release date of April 26 on Hulu.

Saint X will be told across multiple timelines in a subversive take on the girl-gone-missing genre. It follows a young woman’s tragic and mysterious death off the coast of the titular Caribbean Island and how the incident affects her young sister Emily who was there with her on a family vacation. Over time, the traumatic event will draw Emily into an obsessive and dangerous pursuit of the truth both about her sister Alison’s death and who her sister actually was.

The first of the four images shows Debnam-Casey as Emily as she peers through a window in her apparent search for answers regarding her sister. In the book, she finds both suspicions in, and attachment to, Clive “Gogo” Richardson (Bonzie), one of the men originally suspected of killing Alison (Duchovny). He’s described in the show as a warm-hearted yet reserved and clumsy 20-year-old who grows up into a hardened man due to the events on Saint X. Bonzie‘s Clive is giving in the spotlight in the second image as he’s wandering through the tropics covered in dirt and sweat. The third image centers on Clive’s friend Edwin (Elijah) and Allison as they enjoy their time together on the island. Alison takes a liking to Edwin, but his distrust of the rich island resort patrons casts some doubt on his intentions. Finally, Brandt and Park appear in the fourth image as Emily and Allison’s upper-middle-class parents who look the part of members of the upper crust of society.

The rest of the cast is rounded out by Bre Francis and Kenlee Anaya Townsend. Originally, the lead role was given to You star Victoria Pedretti, though creative differences saw her exit the role of Emily back in May in favor of Debnam-Casey.

Saint X premieres exclusively on Hulu on April 26 with three episodes followed by new episodes weekly. Check out the images below.

Here is a first look at our newest series, Saint X. Coming to Hulu on April 26. #SaintXOnHulu pic.twitter.com/2CihNIJTsw