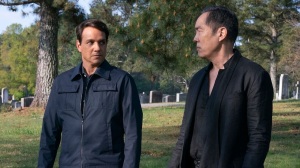 The hit Netflix series is coming to an end as Cobra Kai has been renewed for a sixth and final season. Jon Hurwitz, posted a note to his Twitter account making the announcement, and thanking the fans for the support they’ve shown the “Miyagiverse” over the years.

“Reacquainting the world with ‘The Karate Kid’ universe has been our humble honor. Making Cobra Kai has allowed us to join the same hallowed dojo once inhabited by the great Robert Mark Kamen, John Avildsen, Jerry Weintraub, and all the amazing original cast members. It has also enabled us to play sensei, expanding the original storylines and birthing a new generation of underdogs. We’ve never once taken this opportunity for granted,” said Hurwitz alongside Josh Heald and Hayden Schlossberg, creators of the show, in the statement.

The series initially debuted on YouTube Red in 2018 before eventually moving to Netflix for its third season. Releases to positive reviews from both critics and fans of the franchise Cobra Kai serves as a continuation of the Karate Kid film series and centers on Johnny Lawrence’s (William Zabka) path to redemption following the re-opening of the Cobra Kai dojo. The show proved to be popular with four additional seasons, all of which were well received. While many fans may express disappointment of the series now coming to an end with its sixth season, the creators further stated that the show is still ending on their terms. The announcement also came with a short teaser that looked back at the legacy of the story, featuring clips of Johnny and Daniel (Ralph Macchio) over the years.

“Our day one goal with Cobra Kai has always been to end it on our terms, leaving the Valley in the time and place we’ve always imagined. So it is with immense pride and thankfulness that we are able to announce that achievement,” the creators of the show further added. “The upcoming Season Six will mark the conclusion of Cobra Kai. While this may be a bittersweet day for the fandom, the Miyagiverse has never been stronger. This fandom is the BEST on the planet and we hope to be telling more Karate Kid stories with you down the line. Because as we all know, Cobra Kai Never Dies.”

While the letter doesn’t offer any additional plot information on what fans can expect from Season 6, it does give fans the promise of a heartwarming conclusion to the beloved series. No official release date for the next season has been set yet, but additional information is likely to be revealed as production on the series finale eventually wraps. Cobra Kai stars Zabka, Macchio, Courtney Henggeler, Xolo Maridueña, Tanner Buchanan, and Mary Mouser, among many others.

Episodes of Cobra Kai are available for fans to stream on Netflix.