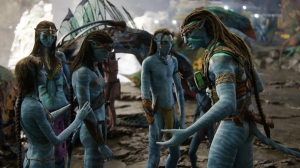 Director James Cameron’s Avatar: The Way of Water has become the sixth film in history to pass the $2 billion mark at the global box office. With $598 million domestically and $1.42 billion from overseas markets, The Way of Water’s global haul now stands at a phenomenal $2.023 billion.

The epic science-fiction sequel, released 13 years after the first Avatar, is still the sixth-biggest film of all time at the global box office, and will top Avengers: Infinity War ($2.048 billion) and Star Wars: The Force Awakens (2.064 billion) in a matter of hours, settling into the fourth spot. When it does, The Way of Water will trail only Titanic ($2.2 billion), Avengers: Endgame ($2.79 billion) and the first Avatar ($2.9 billion) — meaning that three of the top four movies in history will be Cameron’s.

This should leave no doubt in anybody’s mind that he is the undisputed king of the box office, and that questioning his ability to attract audience to theaters and push the boundaries of big-budget filmmaking is foolish. In the weeks and months leading up to The Way of Water’s release, there were concerns about the franchise’s cultural relevance, considering that more than a decade had passed since the first movie — a decade in which the film’s fans had clearly not been as vocally supportive of it as they could have, especially online. Even the usually boisterous Cameron appeared to be reluctant to make big claims, when he said in a GQ profile that the franchise’s future was still up in the air, and that it would ultimately depend on The Way of Water’s success, which wasn’t a sure thing.

Because of the film’s high production costs, he said, The Way of Water would need to finish as the third or fourth-biggest film of all time just to break even. Variety later suggested that the break even point was closer to $1.5 billion, but either way, The Way of Water has now met those high benchmarks, and Cameron has said that he will move ahead with the Avatar 3 after all. The filmmaker has two further sequels written, and portions of the fourth film have been shot. He has said that he could also go as far as directing a sixth and seventh films, but that he would eventually have to hand over the reins to other filmmakers.

The U.S. is still the film’s biggest global market, followed by China ($229 million), France ($129 million), Germany ($117 million), Korea ($96 million) and the United Kingdom ($81 million). The Way of Water received a rare China release, and an even rarer extension, at a time when the Middle Kingdom has been growing increasingly unaccommodating towards imports. Notably, the first Avatar debuted in China when the number of operational theaters was only a fraction of what it is now. Over the years, the first film has been re-released in the Middle Kingdom multiple times, pushing it past the $200 million mark.

There’s clearly still fuel left in the tank for it to continue performing over the next few weeks. The first Avatar famously refused to drop for months, and even though The Way of Water hasn’t been as resilient, a lack of competition combined with event movie-status has helped keep it afloat for weeks.