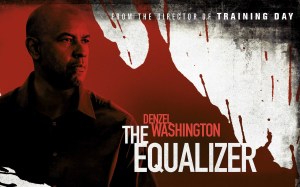 Synopsis – A man believes he has put his mysterious past behind him and has dedicated himself to beginning a new, quiet life. But when he meets a young girl under the control of ultra-violent Russian gangsters, he can’t stand idly by – he has to help her.

My Take – This film is not your typical action flick, well it does come under the category of the recent set of films “Pissed off ex CIA is gonna kill everyone”. Antoine Fuqua, the director who brought us Training Day, which earned Denzel his Best Actor Oscar, helms this movie with a steady hand.

His direction of the drama and the action blend seamlessly, drawing us into the complexity of this character-driven piece. Based on an 80s Tv show, the film relies on great choreographed fights, fantastic explosions & character driven roles. The only thing working against the film is the predictability & the slow pacing. Denzel Washington is one of the few A listers who has been performing high & steady with his movies in the recent years.

Here, he is quietly contained, but with ever-building intensity, Washington turns in another stellar performance. The Equalizer may not appeal to everyone but luckily the film rises above its mundane predictable plot & team Washington/Fuqua makes sure it gives us a darker hero for darker times, and one you will cheer on every step of the way!!