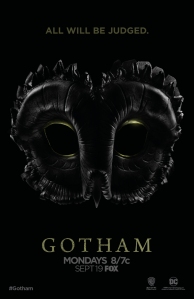 Fox’s Gotham continues to roll through its “Mad City” theme in Season 3, one which saw the arrival of Benedict Samuel as Jervis Tetch a.k.a. The Mad Hatter, and Maggie Geha as a sexed-up Ivy Pepper. Jim Gordon (Ben McKenzie) continues to fight his battles on a number of fronts: his complicated relationships with women, as well as his equally complicated deals with some of Gotham’s finest and filthiest alike. And if you thought things were going to clear up for Gordon any time soon, well you haven’t been paying attention.

James Remar has been confirmed as joining Gotham this season as Jim Gordon’s uncle, Frank Gordon. As is the case with all things Gotham, this new character comes pre-loaded with a dark and mysterious backstory, so don’t expect him to have good intentions when he reaches out to Jim. Family can be such a pain.

Here’s a look at the official character description:

Frank Gordon: Jim’s uncle, Frank Gordon, is a master at playing both sides and a man who knows how to keep a secret. Frank abandoned the family after Jim’s father’s fatal car crash and now, twenty-five years later, he’s returned to reconnect with his estranged nephew. But Frank harbors a dark secret, one that will upset the very foundations of Jim’s world and force him into a terrible choice between saving his family and saving his city.

Remar’s inclusion in Gotham brings some more gravitas to the show, one which rotates TV talent in and out at a rather inconsistent rate. There’s no telling how long Remar will be featured as Jim’s uncle, but there’s a good chance he’ll be around long enough to royally screw things up for his nephew. If you want more Remar, be sure to check out The Path on Hulu, and get caught up on Code Black, and The Shannara Chronicles.