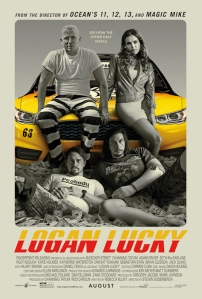 For the most part I stay busy trying to keep up with the nearly 500 scripted TV shows premiering every year (saints preserve us …) but occasionally a movie grabs my attention; Logan Lucky is such a one. I’m a big Steven Soderbergh fan, not just because of what he’s done in the film world, but his contribution to TV as well (The Knick, RIP). Yet as a southerner, I’m always a little wary about movies set in the south featuring actors muddling through on horrific twangs. From what Logan Lucky has shown us so far, though, they actually get it pretty right here.

The movie revolves around two brothers (Channing Tatum and Adam Driver) who break a convict (Daniel Craig) out of prison to help assist them in a grant heist at the Charlotte Motor Speedway. It’s a crazy idea led by what looks like a endearingly dopey duo, hence the comedy. But in a clip released today, it looks like Craig may steal the show as that gleefully deranged (and yet very methodically thoughtful) convict, Joe Bang. Even more heartening, that accent and cadence (which is the real test) is perfect.

The Logan’s are a blue-collar family from the hills of West Virginia, and their clan has been famous for its bad luck for nearly 90 years. But the conniving Jimmy Logan (Channing Tatum) decides it’s time to turn the family’s luck around, and with a little help from his friends, the Redneck Robbers, he plans to steal $14 million from the Charlotte Motor Speedway on the busiest race day of the year.

A heist movie with a difference: Steven Soderbergh, the director of the Ocean’s Eleven trilogy and an A-list cast including Channing Tatum, Daniel Craig and Adam Driver deliver a smart, thrilling and funny blue-collar story of an audacious multi-million dollar robbery.