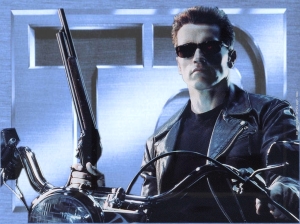 Linda Hamilton has been absent from the Terminator franchise since T2: Judgment Day (although we did hear her voice in recordings featured in Terminator Salvation). However, she’s set to return for Terminator 6, and the first images of her have leaked online.

There’s not much to say here other than she looks like a total badass (as always), and I’m curious to see how they’ll bring her character into the narrative. It seems like the plan here is to just ignore everything that happened after Terminator 2, and follow a new timeline that allows Hamilton and Arnold Schwarzenegger to appear, but also hand off the series to new stars. Of course, this kind of handoff was also the plan with the reviled Terminator Genisys and we all know how that turned out.

Details on the plot are still scarce but we know that Mackenzie Davis has a key role in not just this movie, but also the rebooted franchise with her character being in the vein of Hamilton’s Sarah Connor. This is probably the smart move rather than just getting caught in the non-stop Sarah Connor/John Connor/Kyle Reese/T-100 drama that has weighed these movies down since Terminator: Rise of the Machines. At some point you have to break free and try something new and I hope that’s what Terminator 6 is going for. That being said, you do have to lure people in with the familiar, and if putting Hamilton back in her old Sarah Connor duds is what it takes to finally move this franchise forward, then so be it.

The new Terminator opens November 22, 2019. Check out the images of Hamilton as Sarah Connor below via The Terminator Fans.

Image via The Terminator Fans

Image via The Terminator Fans