Synopsis – A little squad of American soldiers find horror behind enemy lines on the eve of D-Day.

My Take – Nearly every year we get a handful of war films portraying the carnage and the lasting effect of WWII on the society and the human condition. While the events portrayed in the film are quite horrific, they usually end up categorizing them in the genre of drama. Along comes this film from director Julius Avery (Son of a Gun) and producer J.J. Abrams (Star Wars, Star Trek, Cloverfield), which is more of a genre cocktail of horror and war that is totally and tonally absurd on every account, yet somehow feels like breath of fresh air to finally see a war film that takes a more horror approach by shamelessly merging factual history with ludicrous mythology and also remain supremely entertaining.

The WWII action is quite intense and exciting, the mutated zombie action is bloody and outrageous, and the combination of the two is crafted with an eye towards fun thrills. While the film’s screenplay isn’t anything groundbreaking, as it features the typical character tropes such as the idealistic protagonist, the no-nonsense leader, the wisecracking tough guy, the female badass and the power-hungry villain, the film works mainly due to its awareness of being a genre blast that blends elements as diverse as Saving Private Ryan and Re-Animator into a big, gloriously proud B-film which both war and horror film fans will end up enjoying.

Set in France during the peak of World War II, the story follows Private Boyce (Jovan Adepo), a Louisiana Creole kid on his first mission, who along with a team of American soldiers are being tossed into the horrors of war. Their mission is simple – to enter a small French village occupied by the Nazis and find a way to take down a command center located inside of the nearby church. However, as soon as they crosses the enemy lines, their plane is brought down by the excessive shelling, leaving only a few survivors which includes their leader, Corporal Ford (Wyatt Russell), the ranking officer and explosives expert, Private Tibbet (John Magaro), an aggressive gasbag with a cruel streak; Private Rosenfeld (Dominic Applewhite), a scrawny Jewish-American who worries what will happen if the Nazis discover his last name; and Chase (Iain De Caestecker), a soldier determined to document his wartime exploits on his beloved camera.

Together, they head toward their destination and encounter a young French woman, Chloe (Mathilde Olivier), who gives them a temporary base of operations in her home—inhabited by her kindly little brother Paul (Gianny Taufer) and an unseen aunt whose horrific-sounding cough alludes to a ghoulish sickness. The soldiers learn that a Nazi officer named Wafner (Pilou Asbaek) presides over the French town and is also the commander at the Nazi base at the church target of the troops that also happens to have a large secret underground laboratory complex where Nazi scientist, Dr. Schmidt (Erich Redman), has been conducting twisted experiments on the locals. With just a few short hours to take out the radio tower, the soldiers must put aside all their difference and work together to make sure that the Nazi’s don’t succeed in their notorious plans.

The plot is simple, action-packed and has it all in the form of lots of shooting machine guns and flamethrowers. Seriously this film has no right being so good, as it’s the stuff of vulgar B-films and exploitation, yet it packs quite a punch in it’s a tense, violent, and crazy 109 minutes. This is not the first time when J. J. Abrams has put finances into the risky project (Cloverfield), but this is definitely a curious choice for such a filmmaker, as this is a rare hybrid of a WWII film and a zombie horror, the kind of films that were prosperous back in 1970s and early 1980s, but has been long gone since then. While relative newcomer Julius Avery might be the director here, the film clearly has J.J. Abrams‘s touch along with his “I love the ’80s” vibe, all here.

Originally slated as another production in the Cloverfield universe, then changed into being a separate standalone film, the film thankfully thrives with its own unique enthralling story. It throws the viewers right into the fire with an absolutely genius introduction sequence that truly immerses us in the midst of what D-Day would’ve felt like. Sadly, no other sequences in the film are able to match the quality and intensity of its opening, but later scenes still find different ways to keep you on the edge of your seat. A Nazi officer barges into Chloe’s home and begins grilling her in a scene that is reminiscent of the opening of Inglourious Basterds, complete with the dragging sense of dread that he’ll find exactly what he’s looking for. 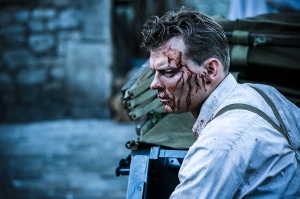 A few sequences like the protagonist sneaking through the Nazi compound and climatic battle are also quite mind blowing. The first actual transformation into a zombie-human is also brilliant scene. It sets the tone for the rest of the film and is instantly iconic for this kind of zombie. The simplicity of the story script also allows the film to walk that line, you never once have to wonder where the film is going. Without a doubt this film is a pure hell fest, unabashed in its fashioning of tattered grind house attire and yet never cheeky in its delivery. It is this straight-faced quality that sells the whole bloody beast. The characterization is evident from the start and you really start caring for them early on and throughout, especially the two main protagonists.

As the story develops you realize there is more to fear than Nazi’s and war itself, and it goes into some very odd and gruesome territory with a triumphant heroic finale. What the film really gets right is its ability to truly thrill. Almost every single moment is fraught with tension; war is kind of stressful, and you’ll feel kind of stressed just watching it. Director Julius Avery wisely shows every moment almost exclusively from Boyce’s point of view, repeatedly giving the audience long, nerve-wracking takes filled with nothing but the soldier’s heavy breathing. While the script by Billy Ray and Mark L. Smith uses familiar shorthand with the soldiers it works to make each of them unique and appealing. Enough time is spent with them to make viewers care once the Nazi shit starts hitting the Nazi fan, and the unlikely live or die outcomes keeps things from being wholly predictable through to the end.

The action is absolutely full throttle throughout the film and never lets up with some truly fantastic sequences. The zombies are pretty terrifying too. Significantly more frightening than the zombies of say, The Walking Dead, these poor souls are the villagers that the Nazis performed hideous experiments on, reanimated back to life or merely clinging to it in grotesque ways. They’re fast, strong, and they can’t always be stopped by just a simple headshot. The film makes the smart decision to limit the appearances of them, and they feel more like the dressing on top of the film rather than the main course. The film does well by only taking place over the course of two days and it never changes its setting. Practical sets and effects are also frequently used, a welcome sight in today’s special effects driven films. If there’s one thing that nearly sinks the film, is that it is not so much of the horror film it claims to be. It’s only got a few jump scares, but even then I saw them coming. It actively relies on gore to bring in the shock, a factor which may turn a general audience member quite skirmish.

Thankfully the film features some breakout performances that may help immerse the viewer in the material. Jovan Adepo is a star in the making. His earnestness, courage, and loyalty literally bursts from the screen. Wyatt Russell is also particularly good. Being the son of Kurt Russell and Goldie Hawn, Wyatt uses his inbuilt charm well enough to be suited for the tough guy role that his father has patented. Pilou Asbaek gives a terrifically dark turn as the lead Nazi officer whose already evil core is amplified by sleazy interests in Chloe and monstrous ones in the name of scientific research. Mathilde Ollivier is practically the only woman here, but she’s so absolutely badass amazing that she almost shines more on her own. The rest of the ensemble which includes John Magaro, Dominic Applewhite, Iain De Caestecker and Jacob Anderson are fine enough. On the whole, ‘Overlord’ is an entertaining dark, bloody, action-driven horror that uses it tense and nail-biting setting quite wildly.