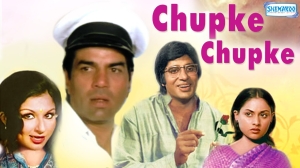 Rajkummar Rao has been roped in to play Dharmendra’s character in Chupke Chupke remake and we cannot keep calm! The hit movie has been rated highly as a comedy and is still watched by masses. It would be interesting to see an adapted version to this classic and Rajkummar playing Professor Parimal Tripathi will be like the cherry on the top.

The movie will be helmed by Bhushan Kumar and Luv Ranjan and it is expected to go on the floors in a few months’ time. It is yet to be known who will play the characters of Amitabh Bachchan and the female leads Sharmila Tagore and Jaya Bachchan. We are also keen to know who will be playing Om Prakash in the remake.

Chupke Chupke was essentially a remake of Chhadmabeshi, a Bengali film, and has been loved by all the generations alike! Raj will surely give his own spin to this classic and stay tuned to know more about the director and rest of the cast.

Rajkummar who enthralled us with movies like Newton and Stree. He has many projects including Mental Hai Kya, Made In China, Imli, Turram Khan and Rooh Afza.