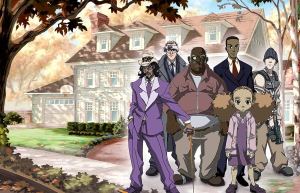 Back when The Boondocks hit the late-night airwaves on Cartoon Network’s Adult Swim showcase in 2005, Facebook was still just for college kids, Twitter had yet to be founded, and Instagram wasn’t even a twinkle in the Internet’s heavily filtered eye. Simpler times. But since the topics that Aaron McGruder‘s razor-sharp satirical series tackled–political critiques, parodies and celebrations of Black cultural icons, and modern living in America through an African American lens–were as relevant then as they are now (and perhaps more so now), The Boondocks remains a worthy watch nearly 15 years later.

But the past success of the award-winning series isn’t stopping McGruder and Sony from exploring more contemporary storytelling. As EW reports, The Boondocks is coming back in a “complete re-imagining … for the modern era.” Little other information is available except to say that The Boondocks began with McGruder’s comic strip on Hitlist.com and in Source magazine back in 1996 and was reinvigorated a few months back by McGruder’s own return to his initial medium:

Check out this comic shared by Charlamagne tha God and note McGruder’s comment:

#BoondocksBack The following message is from Aaron Mcgruder. “Did these for fun (and to see if I still could). More to come… exactly how much more is tough to say. These strips were only possible due to the enormous talent of my good friend Seung Kim, who did the animation for the old show – and he’s a busy guy. Thanks to him and thanks to Charlamagne for putting these out for me while I get my instagram act together.” AM

Seeing Uncle Ruckus elevated to political office is worth the reboot alone, but our contemporary times where knee-jerk reactionary culture runs hot on both sides of all divides will give The Boondocks plenty of runway for multiple seasons, should McGruder and Sony want to do so. If McGruder thought the constant conversation about the show’s use of “The N Word” was tired back in 2005, I can only imagine what it’s going to be like in 2020 and beyond.

But McGruder has been busy with other projects outside of The Boondocks reboot, like the live-action alt-history Amazon series Black America. Here’s that show’s synopsis:

Black America “envisions an alternate history where newly freed African Americans have secured the Southern states of Louisiana, Mississippi and Alabama post-Reconstruction as reparations for slavery, and with that land, the freedom to shape their own destiny. The sovereign nation they formed, New Colonia, has had a tumultuous and sometimes violent relationship with its looming ‘Big Neighbor,’ both ally and foe, the United States. The past 150 years have been witness to military incursions, assassinations, regime change, coups, etc. Today, after two decades of peace with the U.S. and unprecedented growth, an ascendant New Colonia joins the ranks of major industrialized nations on the world stage as America slides into rapid decline. Inexorably tied together, the fate of two nations, indivisible, hangs in the balance.

Granted, we haven’t heard much on that project since it was announced in August of 2017, but here’s hoping that the 2020s are good to McGruder and his slate of projects.