Synopsis – A group of vigilantes set out to take down corrupt superheroes who abuse their superpowers.

My Take – As a fan of fictional superheroes myself, we couldn’t be living in a better time. They dominate pop culture, they rule the box office, and they are just about everywhere. While Marvel and DC continue to fight over who gets to rein, with this series, Amazon gets in on the action with an adaption that portrays our superheroes in a light we possibly could have never imagined (well except Batman, he can do anything).

Based on illustrator Derick Robertson and writer Garth Ennis‘s 2006 comic book series which was originally published by Wildstorm before moving to Dynamite Entertainment, this is a series which unlike its counterparts, distills the clichés and core tropes of the superhero genre by flipping it on its head, giving it a much-needed realism and raising a simple question – what if they are not what they seem?

Adapted by Seth Rogen and Evan Goldberg, who also previously brought Preacher, another one of Ennis‘s similarly outlandish takes to television, and developed by Eric Kripke (Supernatural), is easily one of the greatest superhero based television I have ever seen!

Competing for the top spot with Marvel-Netflix‘s Daredevil. Instead of giving into the mushy yet popular takes which the audience clearly soups up, this series makes a ballsy move by showing an ugly side to the superhero mania and the industries behind them.

And unlike any other genre show, the series encourages us to question the permeating superhero worship going on in our society. Making this adaption such a clever, satisfying, and enjoyable watch. The show hits just the right spot on modern-day issues that run amok in our society, and the best part is the series executes this narrative so well in its clever, graphic, and almost over-the-top fashion.

Anchored by exceptional performances, the latest entry into the genre is bold, intriguing and very watchable, with each episode easily rolling into the next. 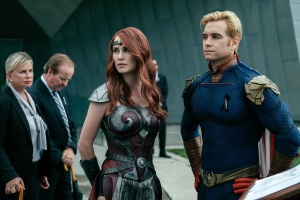 The series takes place in a world where the superheroes are not only worshiped and adored by everyone but are also owned, managed, monetized and marketed by Vought International, under the leadership of its charismatic and scheming vice president Madelyn Stillwell (Elisabeth Shue). With their biggest asset being The Seven, a group of heroes, led by Homelander (Antony Starr), and consisting of Queen Maeve (Dominique McElligott), A-Train (Jessie T. Usher), the Deep (Chace Crawford), Translucent (Alex Hassell) and Black Noir (Nathan Mitchell).

While the company remains always geared up towards capitalizing on their godly image, and possibly even get them into the military, the fact remains that all these supers do is abuse their powers with no regard to the collateral damage they cause, with Homelander being the most conniving of the lot.

However, the story follows Hughie (Jack Quaid), an ordinary salesman, whose admiration for the supes of his world is shattered when speedster A-Train accidentally kills Hughie’s girlfriend Robin (Jess Salgueiro), by running through her. While his father (Simon Pegg), encourages and supports him to get over her loss, Hughie remains distraught and disillusioned, especially when Vought offers Hughie money to keep the Seven’s image immaculate and to let A-Train gets away scot-free.

Making him an ideal recruit, Hughie is contacted by Butcher (Karl Urban), who has his own personal vendetta to settle, to join Mother’s Milk (Laz Alonso), Frenchie (Tomer Kapon) and The Female (Karen Fukuhara), in a scheme to bring down all of The Seven and their sinister benefactors.

Meanwhile, Annie January aka Starlight (Erin Moriarty), a sincere and well-intentioned superhero, becomes the newest member of The Seven, and within hours of her arrival at the group’s headquarters she’s been demeaned, disrespected and sexually assaulted, compromised physically and morally.

Yet is forced to keep quiet and sacrifice her ideals because of a workplace culture which punishes women for speaking out. Amid all this chaos and cynicism, the two narrative threads somehow converge: Hughie and Annie meet, fall in love and offer a modicum of hope that things might work out.

It’s a complicated plot, with lots of moving parts and twists, but it mostly makes sense. The writers also nailed the pacing, weaving together all those disparate narrative threads into a seamless action-packed whole that never lags, yet never seems rushed.

But much of the success of this series is due to the careful development of its central characters, not an easy feat, given the sheer size of this ensemble cast and the powerfully nuanced performances across the board.

Each character has a fascinating backstory, with secret vulnerabilities and believable motivations. What makes this series so fantastic is how it dissects our pop culture superhero obsession. While superheroes in the show is real, much of the ancillary stuff around them mirrors our own reality.

Here, the public’s complete embrace of supers speaks to our primal need to feel safe and to believe in something better than ourselves. The series destroys that faith. It re-imagines the Superman myth to showcase a society which has lost all faith in democracy to deliver justice and equality to citizens. So, they are forced to turn to otherworldly beings capable of offering swift and effective frontier justice.

What the series doesn’t forget to portray, however, is that both the boys and the supes are human, neither good nor bad, just flawed. For example, the Deep is a known sexual predator but passionately cares about marine animals, and then there’s Queen Maeve, who throughout the season is struggling with her morals. We also have Mother’s Milk and Frenchie who despite being capable killers, are also able to give much love and affection.

And of course, Butcher, who despite his claims of doing it for everyone, has used his personal vendetta as an urge to kill supes just for the sake of killing them. At one point or another, he and Homelander are more alike despite being on the opposite ends.

The series also makes some timely observations about modern geopolitical warfare. America and its weapons contractors continue to profit from the culture of fear that has been created by their War on Terror. For example, Stillwell’s plans to put supes in the armed forces through a multi-billion-dollar government contract is symptomatic of not just a power-hungry country constantly looking to extend its global reach but also the capitalistic greed and corruption that feeds it. Making them as much a villain as the supposed superheroes here.

Being a superhero series it also offers some well-designed action set pieces as well, and features some of the year’s most explicit and brutal scenes. It also has a few funny visual gags in line with its satirical styling, like the Deep’s unsuccessful attempt to rescue a dolphin and Butcher using a super-baby’s laser beams Jack-Jack-style to take down enemy forces will surely raise more than a chuckle or two.

In addition to that, the series also deals with the issue of sexual abuse in the patriarchal system head-on. It doesn’t just skirt around it.

In the comics, Annie’s degradation was treated as an ironic joke, but the show treats her experience as something heartbreaking, which changes everything about this story-line and adds real stakes to the show’s master narrative. Hughie and Annie are both good people pulled into awful situations, and when their paths intersect, their tender connection feels earned. But it’s also in constant danger of being shattered, what with Hughie covertly working to destroy Annie’s own organization.

However, for a show whose stock in trade are subversive reversals of superhero cliché, it often settles for the very tropes it parodies. Like the Female is reduced to a mute and mysterious killing machine. The Middle East, as usual, becomes a haven for terrorists. The writers seem unable to decide whether to turn it into a full-fledged satirical series or silly parody and, as a result, they squander some quality performances of their cast.

Coming to that, Jack Quaid is perfectly cast as the endearingly awkward Hughie, and he’s able to emote convincingly in the tragicomic range in which the series tries to operate. Erin Moriarty‘s Annie is the show’s moral compass, inviting us to empathize rather than judge a character limited in her choices.

Karl Urban proves to be a thoroughly committed performer as Billy Butcher, while Elisabeth Shue manages to be fascinating presence. Anthony Starr is positively chilling in this role, switching between his charming public persona and his violent private one with ease, but his camera-ready smile never reaches his cold, hard eyes.

Meanwhile, Chace Crawford, delivers a sort of unsettling smarmy charm that makes him loathsome and likable at the same time. The same can be said about Jessie T. Usher. Dominique McElligott and Alex Hassell are also equally competent.

Amazon has already given the green light for a second season, which is very good news, considering season one ends on a major cliffhanger. If these first eight episodes are any indication, season two should be once again brilliant. On the whole, ‘The Boys’ is a wickedly funny and darkly entertaining adaptation that works excellently as a wild and gleefully excessive ride.