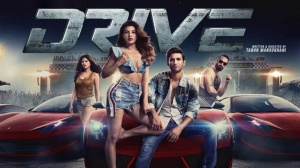 Synopsis – A team of street racers plan to commit a heist in the Indian President’s Palace.

My Take – It is a matter of fact that Karan Johar‘s Dharma Productions is currently the biggest production house in India. While the studio has its name attached to many blockbusters of our time, they have also found themselves backing up a few atrocities in the form of Gori Tere Pyaar Mein, Ungli, Shaandaar, Ok Jaanu, and this year’s star studded disaster, Kalank. While they also dared to release a film like Student of the Year 2 to challenge the finally changing cinematic landscape of Bollywood this year, it is a relieve to see how they realized that this Tarun Manshukani directed film really wasn’t worth a cinema release.

Despite being ready since 2018, amidst multiple re-shoots and release-day shifts, Dostana director’s sophomore film has instead released on Netflix, everyone’s favorite dumping ground, two days ago. Having seeing it, I must admit, it’s a tough to make a case for the film to be release anywhere, well at least the theater audiences have been spared, right?

Mainly as it doesn’t take five minutes into the film for the awful question to arise in the form of – why was this film made at all in the first place? It begins as product inspired by the Dhoom series and ends up becoming a way more ridiculous spin off centered filled with slipshod action drama and cardboard characters.

Despite starring instantly likeable actors like Sushant Singh Rajput and Jacqueline Fernandez as the leads, this Netflix Original is just nauseating to watch owing to its terrible VFX in the supposed high speed chase sequences, which were meant to be the heart of the film.

The story following Tara (Jacqueline Fernandez), the owner of a courier service which she runs with her trusted allies, Bikki (Vikramjeet Virk) and his girlfriend Naina (Sapna Pabbi), a service which is not necessarily into legit transactions. And at night, Tara is also a champion in street racing.

Elsewhere, a super thief who is identified as King is wreaking havoc around town, by only stealing from high-profile places, and by leaving his calling card at the scene of crime, announcing his next target, which happens to be the Rashtrapati Bhavan, the official residence of the President of India in New Delhi, this time around.

In order to prevent King from fulfilling his mission, Vibha Singh (Vibha Chibber), a corrupt bureaucrat in the Black Money wing of government, who operates from the Bhavan, receives a call from the prime minister requesting that she and her right-hand man, Hamid (Pankaj Tripathi), provide full support to his aide Irfan (Boman Irani), to nab the master thief in action.

Meanwhile, Tara and her gang are introduced to Samar (Sushant Singh Rajput), a mysterious racer, who offers them a plan he has devised to steal Vibha Singh’s illegal collections from the Bhavan, all under the guise of the King.

Soon they all embark upon a game of deceit with authorities and themselves. Right off, the Netflix release seems like a concoction of various set pieces ripped off from Hollywood films, but what pricks one is it still limits itself within the sensibilities of the Bollywood version of a heist film in the form of predictable whodunit twists, an unnecessary romance angle and the Dharma staple – a wedding song sequence, for whenever the plot wears thin.

The film’s very first scene, a nightmarish love child between the Dhoom series and the Fast and Furious franchise, involves a drag race that unfolds at India Gate with the kind of tackiness that would have been shocking even if the film was a parody. I’m not sure what is more unbelievable about this scene: the fact that this breathless race is won by Jacqueline Fernandez‘s Tara, or that she drives a car while wearing something that looks impossible to breathe in. Even by the low standards of Bollywood heist films, this one is supremely lazy film-making.

Here, director Mansukhani and his creative team don’t even look like they have brainstormed in an effort to craft a gripping film. Everything from the suspense drama to the action, even the odd comic hint and the corny chemistry of the leads, seems too superficial to leave an impact. 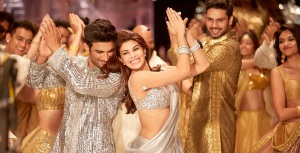 My personal breaking point being the scene in which the gang stands perfectly still so that the security team of apparently one of the most secure buildings in India thinks the system has frozen. This scene is a monument to bad taste.

The problem with the technical aspects of the film goes beyond every other lapse. The supposed high-octane racing sequences are obviously inspired, and the VFX just terrible. Sad thing is, this happens repeatedly and you can’t help but find it bothersome.

Even the lip-sync with dialogues is an issue. At some instances, faces are blurred out or supplementary shots used to hide the fault in dialogue syncing. Seeing this feels weird and discouraging. Yes, nobody expected a film of this genre to be path-breaking, but it doesn’t help matters that the film seems to be either completely unaware of its sub-standard quality and is instead weirdly boastful about it.

The wafer-thin script also doesn’t provide its cast any form of decent chance to perform. It is just tragic to see Sushant Singh Rajput in this exhausting film, soon after the exceptionally splendid Chhichhore, and strangely his performance here is one-dimensional. With his go-to expression being a charmingly smile or smirk. All Jacqueline Fernandez does here is pose and preen in designer wear that looks as out of place as racing gear, yet in many ways, she is the only one that keeps your interest alive in the film.

Sapna Pabbi is a decent actress, but here she has nothing to do but play second fiddle to Jacqueline, the same goes for Vikramjeet Virk. This crash and burn also contains some wasteful performances from acting powerhouse like Boman Irani, Pankaj Tripathi and Vibha Chibber, who put in their best efforts. On the whole, ‘Drive’ is quite possibly the worst heist drama Bollywood has ever released, thanks to its under-par story-line wrapped in awful VFX.