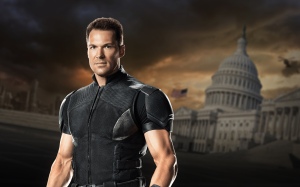 Hulu’s take on the classic Marvel’s Helstrom has added another familiar face to the cast, especially for fans of Fox’s X-Men movies. Cudemore originally appeared as Peter Rasputin, a.k.a. Colossus, in X2: X-Men United back in 2003. He later reprised the role for its follow-up, X-Men: The Last Stand and X-Men: Days of Future Past.

The series follows Daimon and Ana Helstrom, a brother and sister who utilize special abilities to track down a serial killer. However, they also happen to be the children of said killer. Cudmore will portray a nurse by the name of Keith Spivey. He works at St. Teresa’s, the institution where Daimon and Ana’s mother, Victoria, has resided for the past two decades.

This series will feature a non-traditional horror setting. During the cast announcement last month, Loeb talked about how it will all come together.

“Marvel Television is thrilled to have such an amazing cast that enriches Paul’s fantastic writing,” said Loeb at the time. “The ensemble is the perfect way to bring our audience into our Adventure into Fear franchise causing delicious nightmares of what’s to come!”

Helstrom is currently in production. It will probably premiere on Hulu in 2020.