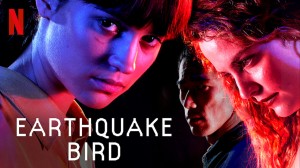 Synopsis – An enigmatic translator with a dark past is brought in for questioning after an ex-pat friend, who came between her and her photographer boyfriend, ends up missing and presumed dead.

My Take – Yet another week, yet another Netflix Original release. However, what is supposed makes this one differ from the usual dole out is that it has been marked as a prestige release, just like The Laundromat, The King, Dolemite is My Name and the upcoming Martin Scorsese directed mob drama, The Irishman.

After all it is backed by filmmaker Ridley Scott‘s Scott Free Productions, adapted from author Susanna Jones‘s acclaimed 2003 novel and directed by Wash Westmoreland, known for well received dramas like Still Alice (which garnered Julianne Moore an Oscar) and last year’s Colette, who is far from unfamiliar with putting together a character-driven period piece.

Granted, the technical elements of the film are impressive, featuring some elegant cinematography and an eerie score, but there is little to enjoy here, with a woeful script underpinning a slow story that fails to grab attention from its sluggish start to its frustratingly predictable end.

While the concept didn’t need it to unleash humdinger twists or profound revelations in order to be good, but it’s as if director Wash Westmoreland couldn’t decide which path to take, and opted for the bland median between an intriguing thriller and a straight up drama. Even though Alicia Vikander clearly outshines the material here, but by the time the end credits roll, nothing registers but a hollow, exploitative little story that looks nice, but is of little value otherwise. Best to gauge your expectations accordingly.

Set in 1989 Japan, the story follows Lucy Fly (Alicia Vikander), a Swedish ex-pat, who relocated to Tokyo five years ago, and works as a translator, while living a life that follows a carefully constructed monotony. While she has friends in the form of Bob (Jack Huston), an aspiring musician, and her co-worker, Natsuko (Kiki Sukezane), and a hobby, playing cello in a string quartet with the unmarried middle aged Ms. Kato (Akiko Iwase), Lucy continues to be undeniably lonely.

Her life changes when she comes across Teiji Matsuda (Naoki Kobayashi), a photographer, who also works in a noodle shop. While Lucy is extremely reserved about being captured on film, Teiji convinces her to continue otherwise, hereby developing a relationship which Lucy has been desperately craving for. Though Teiji seems aloof to any form of sexual contact at first, he soon reciprocates.

However, trouble comes in the form of Lily Bridges (Riley Keough), an American friend of Bob, who requests Lucy to help adjust, as she can’t speak Japanese and has nowhere to live. While Lily is nothing like Lucy in nature, the two soon form a sort of codependency, which begins to get affected when Lucy begins to notice Lily’s increasing closeness with Teiji, sending her down a road to paranoia which gets worse when Lily goes missing.

It is unfortunate that the film doesn’t translate to very much at all, as it makes its way from page to screen, struggling to elicit any noteworthy level of impact from either its dark mysteries or its startling revelations about past trauma, the source of which makes for a final reveal, but not before we’re presented with plenty of evidence that death, as Lucy suggests, follows her around.

Here, director Westmoreland aims to say a lot with very little, with a minimalist script and a strong focus on the physical performances of the cast, Vikander in particular. However, when using this method, it is important that the sparse moments of dialogue are sharp and impactful, but the script fails to leave any real impression. It is never able to figure out if it wants to tell a The Girl on the Train-styled mystery or a Basic Instinct-esque erotic thriller, or just an outright relationship study, or even perhaps just something like Gone Girl, where twists and turns play with character expectations. Instead, it plods along in an almost comatose state.

While we know Lucy’s recollections are not to be taken at face value, but the film’s superficial psychological probing prevents us from becoming too wrapped up in proceedings.

There’s a conspicuous lack of tension, both in terms of the murder mystery and the central romance. What makes it worse is how the slow-burn narrative of jealousy and betrayal fizzles out in the final act. It’s a clear-cut ending that lands with a thud, especially during a coda that further absolves Lucy for any of the tragedies that have happened in her vicinity.

And also because, Teiji is never defined beyond his vaguely sexy menace, which makes the ultimate reveal all the more disappointing. The film at times even abandons the central murder mystery for something else entirely as it wanders through unrelated and uninteresting side stories.

Nevertheless, despite the film’s issues, the technical aspects of the film are praiseworthy. Director Westmoreland and cinematographer Chung-hoon Chung makes the most of Japan, both urban and rural, as a setting, bringing out its natural beauty and beguiling designs and architecture. This is complemented by an eerily effective score, which helps to build tension even in the film’s slowest moments, keeping the audience on edge despite the disappointingly dull events on screen.

Props also go to Alicia Vikander‘s performance, which helps to enhance the overall experience. As the Academy Award winner continues to prove that she is one of the best actresses in the industry today. Her flawless delivery of lengthy monologues in Japanese not only showcases her dedication to her craft but also illustrates her game-changing ability to master any role she takes on.

Naoki Kobayashi puts in an effectively unsettling performance as Lucy’s boyfriend, Teiji, but ultimately lacks the charm or appeal to sell a believable relationship between the two, while Riley Keough is solid as Lily, but is ultimately given very little to work with, acting more as a plot device than a fully fleshed-out character. In smaller roles, Jack Huston, Kiki Sukezane, Ken Yamamura, and Akiko Iwase don’t have much to do. On the whole, ‘Earthquake Bird’ is a pedestrian thriller which despite an intriguing plot ends up being underwhelming.