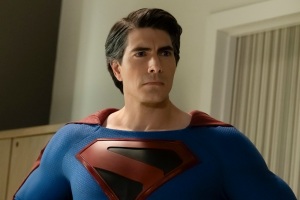 The CW has released an official poster for its Crisis on Infinite Earths Arrowverse crossover event. Beginning with Arrow in 2012, The CW‘s small screen DC universe has grown by leaps and bound, and currently encompasses no less than five TV series. It will bring even more DC TV shows into the fold with Crisis on Infinite Earths, an adaptation of the comic book storyline that will include characters from Black Lightning and Smallville in the Arrowverse for the first time. There are even rumors that the new Stargirl will show up at some point.

Story-wise, the event will mostly focus on the characters from the five core Arrowverse shows: Arrow, The Flash, DC’s Legends of Tomorrow, Supergirl, and Batwoman. However, it will also bring their namesakes face to face with all manner of alternate universe versions of their friends and family, including the Kingdom Come iterations of Superman (Legends‘ Brandon Routh, back in his Superman Returns role) and the Caped Crusader (the legendary Batman voice actor Kevin Conroy). Understandably, though, the crossover’s teasers and promotional artwork is keeping its main heroes at the forefront for the time being.

Case in point: the newly-unveiled Crisis on Infinite Earths poster, which features eighteen familiar faces from the Arrowverse. Check it out, below.

Among those pictured here are characters from Supergirl (J’onn J’onzz, Lex Luthor, Lois Lane, Tyler Hoechlin‘s Superman, and Kara herself), Arrow (Oliver Queen, Lyla Michaels), DC’s Legend of Tomorrow (Sara Lance, Mick Rory, John Constantine), The Flash (Iris West, Cisco Ramon, Jay Garrick, and Barry Allen), Batwoman (Kate Kane), and Black Lightning (Jefferson Pierce). These sixteen are joined by Routh as Kingdom Come Superman and LaMonica Garrett as The Monitor, the all-powerful being who foretold of the Crisis in last year’s Elseworlds crossover. Among those not featured here are the Kingdom Come Batman (though a first look image of Conroy in the crossover dropped earlier this week) and Garrett as the Anti-Monitor – the Monitor’s aptly-named antithesis and the one responsible for setting the Crisis in motion.

With so many characters involved (and that’s not including the special cameos), it stands to reason that certain Arrowverse superheroes will be better served by the Crisis on Infinite Earths storyline than others. That’s always been the case with these crossovers, of course, and much of the fun of these events is simply getting to see all these characters interact in the same space, even only for a scene or two. And with Arrow coming to an end after Crisis, this will be the last time fans get to see Oliver Queen save the day with his fellow crime-fighters ever again. Hopefully, the event will give the heroes of Arrow in particular a satisfying sendoff (much like certain superheroes got earlier this year in 2019’s other massive superhero screen event, Avengers: Endgame).