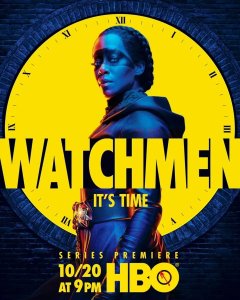 HBO’s Watchmen has been nothing if not ambitious. Spanning generations of time and a distance all the way to a moon of Jupiter, a lot has happened in Damon Lindelof’s continuation of Alan Moore and Dave Gibbons’ seminal comic. But now we’ve reached the final episode of this season, and possibly the last episode overall. A second season has not officially been announced yet, and it would be one hell of a flex for Lindelof to say that these nine episodes are all we’re going to get. But for now, the final episode is being billed as a “season” finale, not a “series” finale, so we’ll assume that there could be more on the way.

Following last night’s episode, “A God Walks into Abar”, we got a trailer for the final episode of the season. Unsurprisingly, it didn’t really tell us anything about what was going to happen, which is fine. The dramatic stakes are firmly set, and we’ve been told all season that this story is a tragedy. It really can’t end any other way since Lindelof is trying to follow the tone and structure of the original comics, which also ends tragically with the deaths of three million people and the bad guy getting away with it. That being said, Lindelof is more of a romantic than Alan Moore, so it’s possible that this season will have a slightly more upbeat conclusion.

My current prediction for how this season will end is that Doctor Manhattan will die but pass his powers on to Angela, and she will use them to obliterate Joe Keene and the Seventh Kalvary. But that’s only a fraction of the story since we’ve still got Veidt kicking around, Lady Trieu’s Millennium Clock, and whatever Will Reeves’ endgame is. I won’t say that Watchmen has done everything perfectly (they brought in Laurie Blake with guns blazing and have since failed to use her in any meaningful way), but overall it’s been a great experience and I’m eager to see how this season concludes.