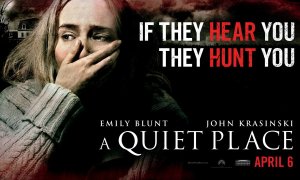 Like any scenario involving the overall width of Dwayne Johnson‘s body, it’s a mighty crowded affair at the box office this weekend between Jumanji: The Next Level, Uncut Gems, Richard Jewell, and Black Christmas. (Plus the option of soaking up the Bayhem of 6 Underground from the comfort of your own home.) But Paramount Pictures might have just given Black Christmas an even bigger edge for horror fans. According to Screenrant, screenings of Sophia Takal’s slasher remake come with a teaser for A Quiet Place 2.

This could be a *Spoiler* for anyone who needs to see a brief teaser completely clean, but those who have seen the 20-seconds of footage note it picks up soon after the end of A Quiet Place. Evelyn Abbott (Emily Blunt) can be seen with a bandage on her foot as she struggles to stay quiet alongside her children. If the image somehow wasn’t seared into your brain forever, here’s your reminder that Blunt’s character stepped on a rusty nail during the first film’s climax.

Directed by John Krasinski—who also starred and co-wrote the script with Bryan Woods and Scott Beck—A Quiet Place is set in a post-apocalyptic world overrun with aliens possessing super-sensitive hearing, forcing those left standing to carry out their lives in near-silence. The horror film was something of a breakaway hit, nabbing $340 million on a slim $17 million budget. The sequel, which adds Cillian Murphy and Djimon Hounsou to the cast, is set to hit theaters on March 20, 2020. Krasinski is back onboard in the director’s chair and tackling the script alone this time around.