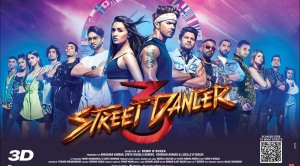 Synopsis – Two rival street dancing groups take on each other in huge tournament.

My Take – Despite dance playing an important part of Bollywood films since forever, there have been only a few Indian films which have contributed to the dance drama genre.

However, back in 2013, the genre found a new lifeline when choreographer turned director Remo D’ Souza with his second venture, ABCD: Any Body Can Dance, brought a simple film led by Prabhu Deva and a set of professional dancers who amply compensated for their limited acting skills by putting up a superb show, hereby winning hearts.

With the film doing decent business at the box office, the Disney backed quasi sequel released in 2015, got even bigger in size and presentation as it also signed on Varun Dhawan and Shraddha Kapoor to fill in the lead roles, hereby resulting in a bigger box office performance. However, with the Disney backing out as producers, this originally third installment retains most of the same cast, but comes with a different title, different location, and a promise to take the dance to the very next level.

Honestly, the film is enjoyable if you like dance to the extent of watching it for two hours non-stop, but for a non-dancer (like myself and many others), dance dramas can make for a strenuous watch, especially in the absence of a gripping script, and therein lies the problem with this film.

Yes, an ardent follower of the ABCD franchise will know what to expect from this one too, however, one of the biggest fallacies this dance drama suffers from is that it believes that the story is secondary to great moves.

Sure, in these politically turbulent times, it’s heartening to see a film that puts peace and harmony above xenophobia, but sadly the film has nothing new to offer. And despite the presence of high bass music and choreography, everything seems familiar especially if you’ve seen Indian reality shows. No doubt it is a breezy film that goes by rather quickly, but don’t expect any nuance or depth here.

The story follows two arch-rival dance groups, one being the Street Dancers filled with members of Indian origin, while the Rule Breakers are filled with members of Pakistani origin, who maintain a strict rivalry and battle each other on a regular basis. The Street Dancers are led by Sahej (Varun Dhawan), whose biggest dream remains to fulfill the dream his older brother, Inder (Punit J Pathak), had undertaken i.e. to win the final act of the dance competition Ground Zero, which he couldn’t due to losing his knee on stage.

Now with a good sum of money in hand, Sahej buys a dancing studio, reunites his group of Street Dancers, and takes the help of Nora (Nora Fatehi), his girlfriend, and an important member of The Royals, the top most performing British dance group in the country, to improve their skills, in order to beat Rule Breakers and the spirit of their leader, Inayat (Shraddha Kapoor).

The stakes are raised higher when a new edition of the Ground Zero Competition is announced and the groups get to know about it. While Anna (Prabhu Deva), the owner of the restaurant where both the groups usually hang at, suggests that both the rival groups should perform together to increase their chance of winning, they refuse.

Unknown to Sahej, who dream is restricted to only his brother, Inayat and her team mates, are hoping to claim the prize money to help the immigrants from the subcontinent, who have no means or money to get back to their own countries.

The whole film is woven around the dance sequences that appear out of nowhere at every five minutes during the film, making it feel like one big fat dance performance at a huge reality show, which has a story thrown in somewhere there. There’s also an extremely sanitized track involving four Punjabi dholwaalas, led by Amrinder (Aparshakti Khurranna), who enter London illegally with the help of Sahej, and become the moral center of the film.

No doubt, the film has its heart in the right place, but one only wishes the music and the choreography had something new to offer. The 3D and some semi-cool visual effects only slightly distract you from a wafer-thin plot that is constantly on the verge of breaking. Now, on paper, the story seems to be well-intended- a tale of a group of talented dancers wanting to bring positive change to society through dance. Sure, why not!

But when it comes to implementation, director D’Souza films take a very different route where the main plot seems like a prop of a very elaborate, long dance program. They switch from issues and plots, with the two nations rivalry, romance, racism and the troubles of illegal Asian migrants in UK. It’s a strange feeling to go from breaking and twerking to homeless Indians and Pakistanis narrating their sad stories, but director D’Souza is obviously moved by their plight, and by the charitable work of the Sikh Welfare & Awareness Team, who get a shout-out at the end.

It’s an irony beyond the scope of this film concerned with the well-being of Indian immigrants abroad that it’s releasing as the country fights over the rights of immigrants in India. However, there is no logical explanation for how illegal migrants are openly participating on large scale dance contests without any scrutiny from the cops. Or for that matter, how can the contest money be enough to fund a legal/illegal exit from UK to their home country unless of course, the borders are porous for easy entry/exit.

Nevertheless, the film leaps to life in the last 30 minutes, as various crews twist and twirl their way through the inevitable contest. With the film made in 3D, be ready for the film to hurl things at you to give the feel of the format. This has been done quite a couple of times before, so much so that it fails to leave you amazed anymore.

As for the dancing itself, it’s expertly done, to see Prabhu Deva perform a new version of “Muqabala” is to feel intensely nostalgic for the ‘90s, a time when dancing in Indian films was either impressive or terrible but wasn’t presented with the seriousness of a military man oeuvre. Technically, this should be a satisfying watch for dance addicts.

Performance wise, Varun Dhawan is starting to feel repetitive. Whether it is realizing one’s mistake or engaging in a spat with his dear friend, Varun looks like he is struggling. Shraddha Kapoor, stepping into a role originally meant for Katrina Kaif, manages to look good and also has some unmatchable groovy moves, while Prabhu Deva is again portrayed as the messiah and moral compass of the film, yet does best for what he is known for, i.e. dance flawlessly.

Nora Fatehi scorches the dance floor and does well with her lines too, that is before the screenplay shuts out her character. Aparshakti Khurrana is once again excellent here. Though he doesn’t have much to showcase in the boundaries of his stereotypical character, his bits are moving.

All the professional dancers, who are part of the film, have done an exceptional job when it comes to dancing, and this is what is expected of them. Dharmesh Yelande, Salman Yusuff Khan, Raghav Juyal and Punit J Pathak among the dancers and reality TV discoveries who have courted Bollywood spotlight in earlier Remo D’Souza films and who are a genuine value-add to his films every time. On the whole, ‘Street Dancer 3D’ is an average dance fest with decent music, great choreography and a whole lot of extra baggage.