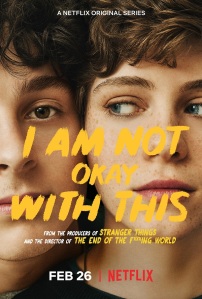 Netflix has released the trailer for I Am Not Okay With Thisstarring Sophia Lillis and Wyatt Oleff. Blending together the vibes, themes, and settings of movies and TV shows like Carrie, Twin Peaks, and Stranger Things, I Am Not Okay With This brings to life Charles Forsman‘s 2017 graphic novel of the same name. The series comes from director/executive producer Jonathan Entwistle and the producers of Stranger Things.

The trailer focuses on Lillis’ character, Sydney. Sydney is a jaded teen navigating changing dynamics with her friends, Stanley Barber (Oleff) and Dina (Sofia Bryant) as well as the hormone-ridden hallways of high school. As she harbors a crush on Stanley, tries to stay close to Dina even though she’s not a fan of her boyfriend, and tries to handle the weirdness of small town life (and journaling just ain’t cuttin’ it), Sydney discovers she may have a superpower. No, it’s not the puberty hitting particularly hard; something’s up. And if the trailer opening with her covered in blood and running from the cops doesn’t clue you in, you’ll soon learn just how important it is for Sydney to control her newfound superpower before it affects her life in ways she never expected.

I Am Not Okay With This comes from both Entwistle and co-creator, writer, and executive producer Christy Hall. The series is also executive produced by Shawn Levy, Dan Levine, Dan Cohen, and Josh Barry for 21 Laps Entertainment. In addition to Lillis, Oleff, and Bryant, I Am Not Okay With This also stars Kathleen Rose Perkins (Episodes, You’re The Worst) as Maggie, Aidan Wojtak-Hissong (The Mission, Falling Water) as Liam, and Richard Ellis as Brad Lewis.

I Am Not Okay With This debuts on Netflix on February 26. Check out the official trailer below: