Thanks to a new Black Widow Topps trading card image that’s been shared online, we have our best look yet at a character who’s sparked a lot of discussion and speculation since he first popped up in the trailers, Taskmaster.

The pic features a full body shot of the mysterious villain, giving us a much more detailed look at his armor.

There are some similarities to Taskmaster’s getup in the comics, but this take on the costume has come in for quite a bit of backlash. Still, these type of things usually come across better in live-action, and we’ve only seen very brief glimpses of him in the trailers and TV spots. 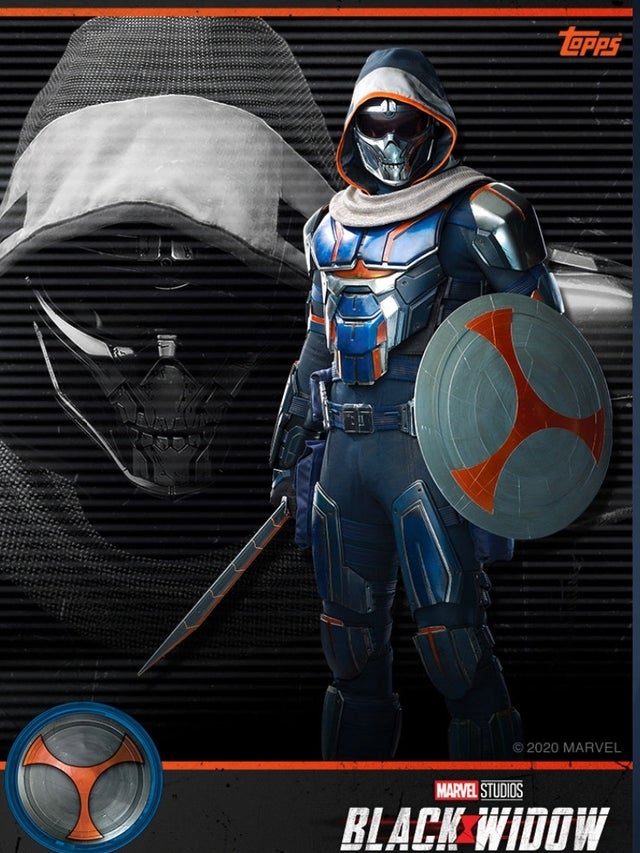 We still know very little about Taskmaster or how he’ll factor into the plot. It’s believed that O-T Fagbenle will play him, but that has yet to be confirmed and could simply be misdirection. One outlandish theory claims that it might be Jeremy Renner‘s Clint Barton under the mask, but that seems more like wishful thinking to us.

“In Marvel Studios’ action-packed spy thriller “Black Widow,” Natasha Romanoff, aka Black Widow, confronts the darker parts of her ledger when a dangerous conspiracy with ties to her past arises. Pursued by a force that will stop at nothing to bring her down, Natasha must deal with her history as a spy and the broken relationships left in her wake long before she became an Avenger. Scarlett Johansson reprises her role as Natasha/Black Widow, Florence Pugh stars as Yelena, David Harbour portrays Alexei/The Red Guardian, and Rachel Weisz is Melina. Directed by Cate Shortland and produced by Kevin Feige, “Black Widow”—the first film in Phase Four of the Marvel Cinematic Universe—hits U.S. theaters on May 1, 2020.” –Marvel Studios.”