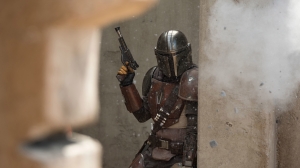 Gina Carano, the former MMA fighter who plays Cara Dune in the Disney+ Star Wars series The Mandalorian, confirmed on her Instagram account that Season 2 of the hit streaming series has finished filming. The actress shared a photo of her on the set of the hit series to announce that the show has finished production, which puts it well on track for its scheduled release in October of this year.

That’s a wrap on season 2.. I absolutely love this work and the people in it. 🤍 #storytelling ✨#themandalorian

The Mandalorian follows a bounty hunter in the Star Wars universe (Game of Thrones’ Pedro Pascal) who is forced to choose morality over money when he’s hired to deliver an infant alien to a sinister nameless client, played delightfully by Werner Herzog. The show, which premiered on the launch day of Disney’s streaming service last November, was a massive hit with Star Wars fans, thanks in no small part to the phenomenon that is Baby Yoda, the adorable little Force-sensitive goober that literally everyone on Earth would die to protect. Created by Jon Favreau, the man just as responsible for the success of Marvel Studios as Kevin Feige, The Mandolorian eschews most traditional Star Wars tropes in favor of a western-style storyline that is closer to Clint Eastwood’s Man With No Name trilogy than The Empire Strikes Back. Favreau also serves as head writer, showrunner, and executive producer.

The announcement of Season 2’s release date less than a year after the series premiere came as somewhat of a surprise, considering the show’s scope and high production value. But Carano’s post confirms that, much like the bounty hunter himself, The Mandalorian is getting it done.