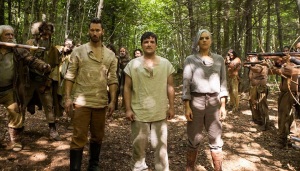 Hulu has released the official Future Man Season 3 trailer, revealing the final season of the comedy series. The show picks up where Season 2 left off, as Josh (Josh Hutcherson), Tiger (Eliza Coupe), and Wolf (Derek Wilson) are now fugitives from a future world that resembles The Hunger Games, run by a character played by Seth Rogen who serves as an executive producer on the show.

Future Man never really exploded on Hulu like it should have, which is a shame. It’s an extremely funny and extremely weird sci-fi comedy unafraid of blowing up its premise to find more interesting storytelling avenues. It appears as though Season 3 will continue the time traveling antics at lightspeed, as there’s a bit of a Bill & Ted’s Excellent Adventure vibe given all the historical figure cameos. I’m excited to see how this all wraps up.

Check out the Future Man Season 3 trailer below. All eight episodes of the final season premiere on Hulu on April 3rd.

Convicted of time crimes and sentenced to death by entertainment, Josh, Tiger, and Wolf become fugitives, on the run through time, trying desperately to evade capture while clearing their names and fixing the big mess of history they’ve made along the way.