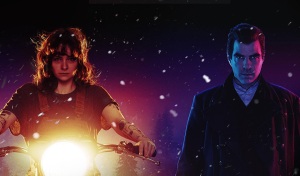 A teaser trailer is now available for the upcoming second season of NOS4A2, the supernatural horror series based on the best-selling novel written by Joe Hill.

NOS4A2 stars Ashleigh Cummings as Victoria McQueen, a young woman who discovers she has a dangerous gift with which she can find lost objects. Vic finds herself at odds with Charlie Manx (Zachary Quinto), a seemingly immortal being who feeds off of the souls of children.

The premise of season 2 is as follows,

Vic McQueen remains more determined than ever to destroy Charlie Manx. Charlie, having faced his own mortality, emerges desperate for revenge against Vic. This time, he sets his sights on the person who means most to Vic – her eight-year-old son Wayne. The race for Wayne’s soul sends Vic and Charlie on a high-speed collision course, forcing both to confront the mistakes of their pasts in order to secure a hold on Wayne’s future.

If this is anything to go by, this next season is certain to be an intense, chilling, and wild ride.

Season 2 of NOS4A2 will premiere with two back-to-back episodes on Sunday, June 21 at 9 p.m. ET as a simulcast across AMC and BBC America.

via Nerds and Beyond