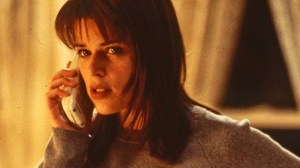 What’s your favorite scary movie? If it’s Scream, then you’re in luck – franchise star Neve Campbell recently offered an update on the status of Scream 5.

In an interview with Collider’s Christina Radish about Campbell’s upcoming movie Castle in the Ground, available digitally and on demand May 15th, Campbell offered some details about the potential fifth installment of the popular horror series, from Ready or Not directors Matt Bettinelli-Olpin and Tyler Gillertt.

“Well, I’m not a hundred percent on it, but to be honest, the two directors ( Bettinelli-Olpin and Gillett) have made some great work. I’ve watched their films, and they’re really talented. They wrote a letter to me, expressing what great fans of Wes’ work they are, and how honored they are that they’re getting the chance to make Scream 5 because the Scream franchise is the reason that they’re directors now. So, that was really sweet. They really wanna honor Wes’ style of work and honor the movies. That was a lovely thing to hear. So, we’ll see. Hopefully, we can all see eye to eye on everything and make something great, but it’s a process.”

Campbell also seemed to indicate that the next Scream film would in fact be a sequel and not a reboot by sharing some of her feelings about where her character, Sidney Prescott, would be in the 21st century.

“I think you can always tell them more with these stories, and they’re such fun films. There’s obviously a huge audience for them, and the audiences wants to see more of them. You can always go further with the journey. Certainly, with Sidney, she comes to some new shift in her life, at the time, and I don’t know. We’ll see.”

Scream was a breakout hit when it released in 1996, thanks to its subversive nature and macabre comedy. While the sequels never quite lived up to the original, the series has continued to be a mainstay in modern slasher films and has managed to redefine the genre at the same time as it skewers its many tropes. Ready or Not’s black comic tone is a perfect fit for Wes Craven’s ironically self-aware murder mystery, and as a fan of both movies, I’m beyond excited to see what these filmmakers do with the series.