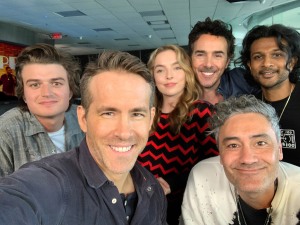 Ryan Reynolds and Shawn Levy are back in business with Netflix, which has picked up their untitled time travel movie from Paramount.

Originally titled Our Name Is Adam, the project was initially developed as a starring vehicle for Tom Cruise. Instead, it will be Reynolds playing a man who must travel back in time to get help from his 13-year-old self. Together, they encounter their late father, who is now the same age as Reynolds’ character.

Skydance has been leading development on the project rather than Paramount, and production is now being eyed to start in November in Vancouver. The following month, Reynolds and Levy’s video game-themed movie Free Guy is slated to hit theaters.

Both Reynolds and Levy will serve as producers on the new film along with Skydance’s David Ellison, Dana Goldberg and Don Granger, as well as Reynolds’ Maximum Effort partner George Dewey. Jonathan Tropper (This Is Where I Leave You) wrote the most recent draft of the script, and previous writers include T.S. Nowlin and the team of Mark Levin and Jennifer Flackett.

Reynolds and Levy each have strong ties to Netflix, as Levy produces the streamer’s breakout hit Stranger Things, while Reynolds recently starred in Michael Bay‘s action movie 6 Underground, which was produced by Skydance. Skydance also produced Netflix’s current hit The Old Guard starring Charlize Theron. Both action films are among the streamer’s 10 most-watched original movies, which yielded few surprises besides the Spanish-language thriller The Platform. Still, that list emphasizes why this new project was a smart acquisition on Netflix’s part.

Originally slated for release earlier this month, Disney will now release Free Guy on Dec. 11, and should theaters reopen by then, Reynolds will do box office battle with Skydance’s Top Gun sequel starring Cruise, which flies into theaters 12 days later.