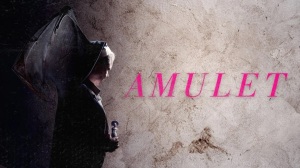 Synopsis – An ex-soldier, living homeless in London, is offered a place to stay at a decaying house inhabited by a young woman and her dying mother. As he starts to fall for her, he cannot ignore his suspicion that something sinister is going on.

My Take – Following the recently released Relic, this is second film I have come across which deals with the troubles of elder care, after all caring round the clock for a very sick parent in their last stage of life can be tiresome for one, both psychologically and physically, however, Romola Garai, known for her works as an actress in films like Atonement, Amazing Grace, One Day, and Suffragette, among others, in her feature-length directional debut, isn’t necessarily interested in the discomfiting intimacy of care giving, but instead puts out an unusual horror perspective by adding both forgiveness and punishment into the mix.

Resulting in a film that will be considered quite divisive amongst the horror crowd.

Heavily influenced by the Italian horror master Dario Argento, here, director Garai combines many elements like the creeping-dread usually seen in Gothic horror and adds some real-world contemporary occurrences, to keep the film unsettling in all the right ways.

Though a slow burn through and through, Garai’s patient writing in this intensely creepy supernatural film masterfully draws you in without major hints at which direction it is going to go, that is until the it lunges itself into a gnarly yet over-the-top climax, an ending which may not work for everyone.

Regardless, as a writer-director Garai deserves appreciation for handing the balance of genres and tones quite well. 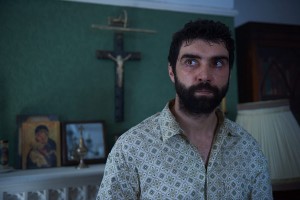 The story follows Tomaz (Alec Secereanu), a former soldier from an unspecified European country who is now living in London. Suffering from PTSD, Tomaz spends his days doing construction jobs and at nights at a refugee shelter, binding his own hands when he sleeps. However when his shelter burns down, he stumbles upon Sister Claire (Imelda Staunton), a caring nun who takes him in and gives him a purpose.

As per her request, Tomaz agrees to work as a live-in handyman for a decrepit home, and help its current resident, Magda (Carla Juri), with odd jobs around the house, while she cares for her sick, elderly mother who lives on the top floor of the house. But soon enough Tomaz realizes something is clearly amiss, as he begins to suspect supernatural elements are at play.

The film periodically cuts back to Tomaz at his lonely outpost, where he encountered a desperate woman named Miriam (Angeliki Papoulia) and offers her shelter. Gradually, the backstory starts to converge with the present as we see Tomaz dig up an amulet in the forest, then later find the same pattern carved into the ceiling of the crumbling house he just can’t seem to leave.

What transpires between Tomaz and Miriam also informs the present-day action. And as the film reveals more, the details of the present-day scenes just get murkier and undermines our instinct to sympathize with him and assume that he’s the hero of this story. As the bad omens pile up, director Garai meets the considerable scary-film challenge of finding a plausible reason why the lead character would keep returning to such a creepy, foreboding place. He’s clearly seeking some kind of stability and absolution, and for a while, the bond he develops with Magda seems to provide it, balancing out any suspicious noises or bad dreams.

There is also the suggestion that Magda is being controlled or gaslit by her mother, but then we are not always sure about who is abusing who. It is hard to decide who has the upper hand between Tomaz, Magda and the unseen but powerful force of the mother, hence, our sympathies can waiver from one character to another. 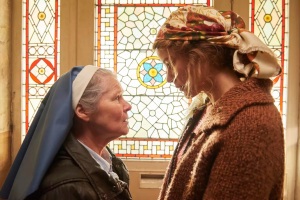 Horror fans familiar with ironic mock-warnings and suspicious of characters fussing over the meat-based dishes might suspect that something is amiss with the cooking, as Tomaz is suddenly ravenously hungry for and Magda uses the classic device of a home-brewed herbal tea concoction to subdue her mother. But the film’s horror burrows deeper, sometimes so deep that it’s hard to tell what exactly is happening on a broader story level.

Here, director Garai sets you up to expect one kind of film, but she’s made something else entirely: a nightmarish story of male violence that becomes an immensely satisfying story of female retribution. And with an emphasis on the themes of violence, forgiveness, and the contagion of evil it does become an exercise in perversity.

Of course there is no escaping the fact that this is a horror film and there are certain discoveries that Tomaz makes in the house that could provoke a visceral, full-body reaction in the audience. The film feels inspired by 70s Hammer Horror and certainly has a practical feel, in terms of any creature design or effects. The house is very much a character in the film, skillfully designed by Francesca Massariol and its presence is felt through the sound design, which are incorporated into the score by Sarah Angliss, as well as the crumbling 1950s feel.

Unfortunately, it is still not going to be a film for every filmgoer. Certainly the pacing is something moan about and the lack of character development may be a turn off for some, all while the ultimate themes hidden inside its grim, savage textures may resonate differently with each viewer, particularly when it comes to their gender identity. While some may find the climax exceptional, its sudden shift in tone, along with the gore that comes with the territory may end up being off putting to many.

Nevertheless the performances are pretty good. Alec Secereanu conveys guilt and anguish without a moment of overacting, while Carla Juri makes Magda’s devotion both touching and troubling. As always Imelda Staunton really sinks her teeth into her role and almost steals the entire film towards the end, while Angeliki Papoulia gives in a compelling and nuanced performance. On the whole, ‘Amulet’ is a dark and disturbing little horror that is packed with complicated ideas and finds divisive ways to convey them.