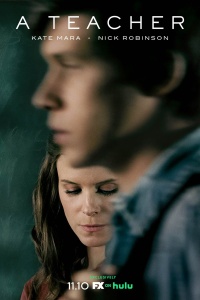 The official trailer for FX on Hulu’s A Teacher has arrived. The 10-episode limited series stars Kate Mara and Nick Robinson as a teacher and her student who must face the serious consequences of their illicit (and very illegal) affair. A Teacher comes from creator, writer, director, and executive producer Hannah Fidell. Fidell also wrote and directed the 2013 indie of the same name on which the series is based.

The trailer for A Teacher hits what will likely be the big beats of the limited series. Those unfamiliar with the story might also be surprised by the misdirect the trailer sets up. We begin with Eric (Robinson) filming high school teacher Claire (Mara) as they hang out together. A montage reveals the two are quite loved up and happy together. But as soon as the lovey-dovey music cuts out, things get very real when we see Eric is one of Claire’s students. He’s a popular football player and she’s a young wife stuck in an unsatisfying marriage. The stakes for these two are high. As the trailer for A Teacher teases, Eric and Claire will soon face wildly different reactions from their peers as their worlds implode from this explosive secret.
A Teacher premieres on FX on Hulu on November 10 with the first three episodes. New episodes will premiere once weekly on Tuesdays after November 10. Watch the trailer below.

Here is the official synopsis for FX on Hulu’s A Teacher:

Beautiful and quietly enigmatic, Claire is the newest teacher at Westerbrook High School. Dissatisfied in her marriage to her college sweetheart Matt Mitchell (Ashley Zukerman), distant from her brother Nate Wilson (Adam David Thompson) and desperate for connection, she quickly befriends fellow teacher, Kathryn Sanders (Marielle Scott). Claire’s life changes when Eric, a charming all-American senior in her English class, takes an unexpected interest in her. Popular and outgoing, Eric is the captain of the soccer team and nearly inseparable from his best friends, Logan Davis (Shane Harper) and Josh Smith (Dylan Schmid). Everything seems perfect on the surface, but Eric is forced to juggle the pressures of school, applying for college and a part-time job, all while helping take care of his two younger brothers so his mother Sandy (Rya Ingrid Kihlstedt) can support the family. Claire and Eric discover an undeniable connection that allows them to escape their individual realities, but their relationship accelerates faster than either could anticipate. The permanent damage left in the wake of Claire and Eric’s illicit affair becomes impossible for them, and their friends and family, to ignore.