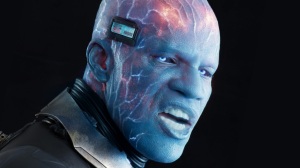 Well this is a shock (get it?): Jamie Foxx, who previously portrayed Spider-Man villain Electro in the abysmal Amazing Spider-Man 2, will be returning to the Spider-Verse for the next Tom Holland-led Spider-Man movie for Sony and Marvel Studios (according to our friends at the Hollywood Reporter). This was not a sentence anybody expected to type today.

According to the report Foxx, who recently starred in Netflix’s superhero-y Project Power, is in final talks to reprise his role from the heavily maligned Amazing Spider-Man 2. If you don’t remember that movie (and, really, who can blame you), Foxx was required to first play a bumbling nerd and then, after an elaborate accident, portray a kind of robotic genie who says stuff like, “It must be my birthday… time to light some candles.” Whew boy.

This third Holland-fronted Spider-Man movie will, in a perfect world, begin filming in Atlanta this fall with returning actors like Zendaya, Marisa Tomei, Jacob Batalon and Tony Revolori reprising their roles. This third film will follow 2017’s Spider-Man: Homecoming and last year’s Spider-Man: Far From Home. This new installment will once again be directed by Jon Watts and produced by Kevin Feige and Amy Pascal.

What makes this whole thing super insane is that the lackluster response to Amazing Spider-Man 2 is what prompted Sony to reach across the aisle and partner up with Marvel Studios, in essence sharing their biggest cash cow this side of James Bond. (Spider-Man: Far From Home is the most successful movie Sony has ever released.) And now they’re inviting him back? Plot details are nonexistent at the moment, but Foxx is continuing in a precedent started by J.K. Simmons returning as J. Jonah Jameson in the closing moments of Spider-Man: Far From Home. (Simmons originally played the character in the original run of Sam Raimi-directed, Tobey Maguire-starring movies.) We also wonder if there are some parallel universe shenanigans going on (or what).

Sony currently has this third Spider-Man movie dated for November 5, 2021 but that could obviously change without warning.